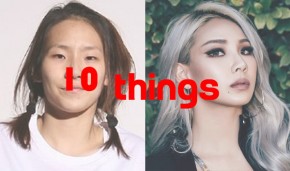 Quite a lot of Korean stars have showed just how powerful makeup can be with their before-and-after photos.

As you know, the make up definitely enhanced their beauty. Some of them were pretty before make up. Well, we’ve seen several comments of saying they look way better after. That’s true. They looked beautiful both ways but they did definitely look better with make up ㅡnot all of them. As a power of makeup, the stars seeking change from their natural face will look different with a more even skin tone, eye liner and some tinted lip gloss. Plus they clinched an incredible transformation of all time while some of them switch to an able stylist. So who had the most dramatic female celebrity makeover?

10 Things Korean Celebrities’ Before And Afters

That Show The Power Of Makeup

Korean netizens rave over CL’s new make-up artist because YG’s queen has transformed from a street ganster to a respectable artist’s look. After hooking up with the make-up artist of full capacity of her choice, her makeup has been on point lately. She’s now stunning and her aura of sexiness and charisma is more unique than former style. Bless Pony.

A Girls’ Generation’s member has definitely gotten a lot prettier and sexier since she was receiving a makeover, catching media attention with her visible transformations. Most of all, the top female idol in this gallery looked a bit healthier.

Nowadays, you see a lot of k-pop groups with girls and boys wearing eyeliner. A member of  Brown Eyed Girls always uses black eyeliner, too. Its special eye make-up emphasizes not only her polished image, but also sexiness.

We’re usually too busy gushing over Seolhyun’s insane body to notice her makeup, but the jolt of bright pink on her lips has officially gotten our attention. Suite make-up for her has also changed her image for the better.

“Red lips are nothing new,” a member of  MisssA says. But what makes her look so modern is pairing them with pink cheeks. Min honestly looks more amazing than ever with her as her makeover.

Has such clear, distinctive features that shine with her god-like make up skills. After makeup she’s much more stylish, chic, and that her features look hot.  Suite make-up for her has also changed her image for the better.

Lee Hyori is widely known for her resemblance to a cat with her usual dark, smokey, sexy eye make-up.  With all the fake lashes and cat-eye eyeliner, the veteran singer flips a whole 180 degrees into a “sexy star”.

The favored  actress has transformed from a small-town woman to a sophisticated superstar after many years as an unknown. Before the make-up is a baby-faced Yewon who radiates with cuteness, and after the make-up is the mature actress we love to see.

The core of Bomi’s feminine makeup is to emphasise her facial features naturally. Its adorable makeover moisturise her skin to create a natural glow. Lately so many fans have been loving her makeup looks.