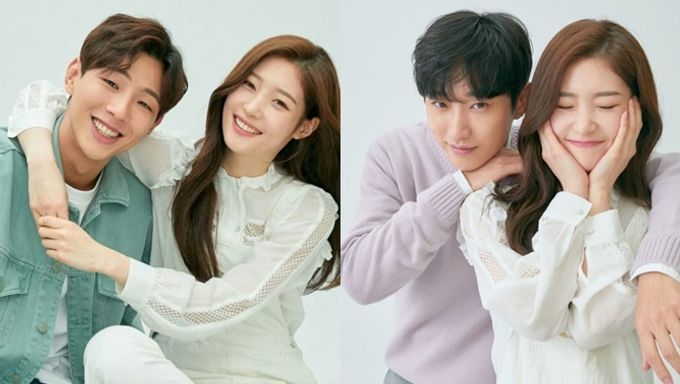 Netflix Original "My First First Love” also called “Because It’s My First Love” was released on April 18. It is the first season of 8 episodes. There will be a season two with 8 episodes.

JiSoo, DIA‘s Jung ChaeYeon, and Jung JinYoung are the main actors of this growth campus romance. It is a drama that tells the story of youth’s first love. The three characters are in search of love, friendship, and dreams. Two university students that have no romantic feelings: a guy friend and a girl friend (female friend), and a close friend of this guy that has romantic feelings for this girl. For more information, teaser, and posters, you can check our cast and summary here. 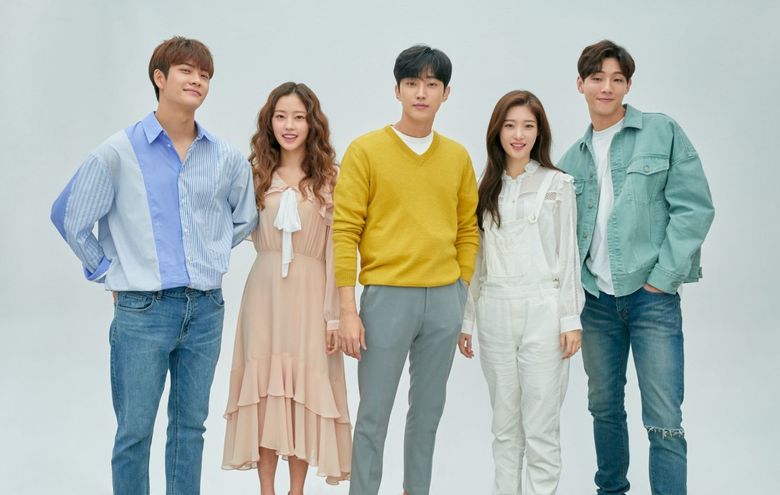 To sum it up, the drama is about 2 close friends (one girl and one guy) and both start to date someone but they begin to realize that they have feelings that are more than friendship for each other.

In the majority of the dramas with love triangles, the guy who gets the girl's heart is highlighted and viewers know who he is after a few episodes. This is why K-Dramas fans have various instances of Second Lead Syndrome. However, in “My First First Love”, it is hard to distinguish the second from the main lead.

The viewers are stuck in the love triangle and it is a hard time choosing between the two of them. The girl also does not seem very sure about her feelings. Here are 4 reasons why viewers have a hard to choose the guy to date Jung ChaeYeon as they both have pro and cons.

Who will win the heart of Jung ChaeYeon as Han SongYi, JiSoo as Yoon TaeOh and JinYoung as Seo DoHyun? Vote for your favorite and let us know why you are for him.

Be aware of the spoilers.

1- JiSoo, the close and dependable friend

It seems quite romantic to date your childhood friend. It is a common theme in K-Dramas.

JiSoo and Jung ChaeYeon are close friends since they were 3 years old. They know each other perfectly. JiSoo has also always been the one who takes care of her in all the situation. He is also currently hosting her in his house.

The boy also has been giving Jung ChaeYeon good love dating advice such as "You should date a man who's willing to put in the effort for you, not a guy who makes you wonder if you should make the first move."

2- JiSoo, the obsessive friend who has a girlfirend

What are JiSoo's real feelings for Jung ChaeYeon: love or obsessive friendship? Time to time, it seems that he is over possessive. For example, he refuses that she goes on a one-day trip with her boyfriend. He says "You'd better cancel the trip [...] It's because he's a pathetic jerk [...] Just do as I tell you."

This might be the main point against JiSoo dating Jung ChaeYeon. He is in deep love with another woman! He falls for her at first sight. It might not be "true" love but he is doing a lot and is trying hard to win her heart. Moreover, he does absolutely everything she wants.

3- JinYoung, the mature guy who starts to be interested in dating

JiSoo might be the perfect guy for Jung ChaeYeon but JinYoung is equally good. Many viewers have been taking JinYoung's side as he mentions that she is the first girl that makes him feel like he wants to date. He has sincere feelings for her and takes steps little by little which makes him look even more adorable.

JinYoung is also responsible and mature. When he confessed his feelings for her, he mentioned that he cannot spend much money on dates and that he is busy with his various part-time jobs but that he will try his best. Who wouldn't like a realist and honest confession? 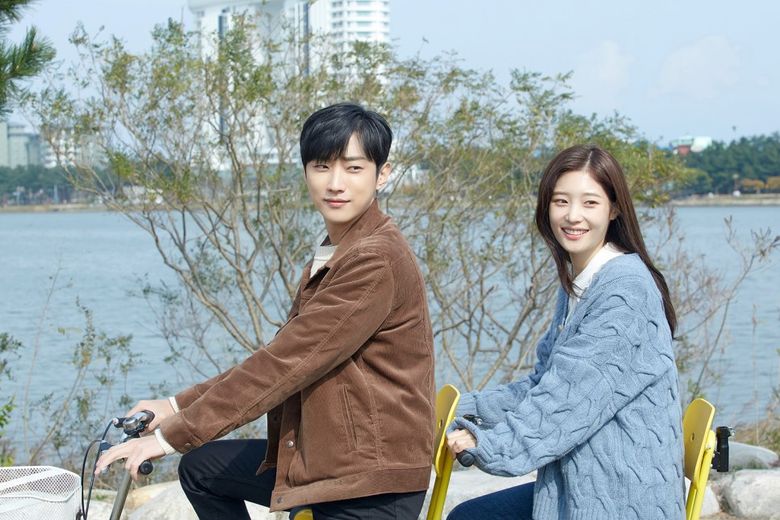 JinYoung does seem like the perfect boyfriend but he still has some negative points too. At the end of episode 8, viewers can feel his jealousy and bad mood after Jung ChaeYoung and JiSoo left to the mart.

He said "Earlier when you left with TaeOh [JiSoo], without telling me, I didn't feel good about it. I feel really stupid for being frustrated because of something like this. When I'm with you, emotions that I've never felt before just keep rushing in." Even if he chose sweet words, he is still making her feel uncomfortable about her relation with JiSoo which might not be recommendable as she has no mean to avoid him. 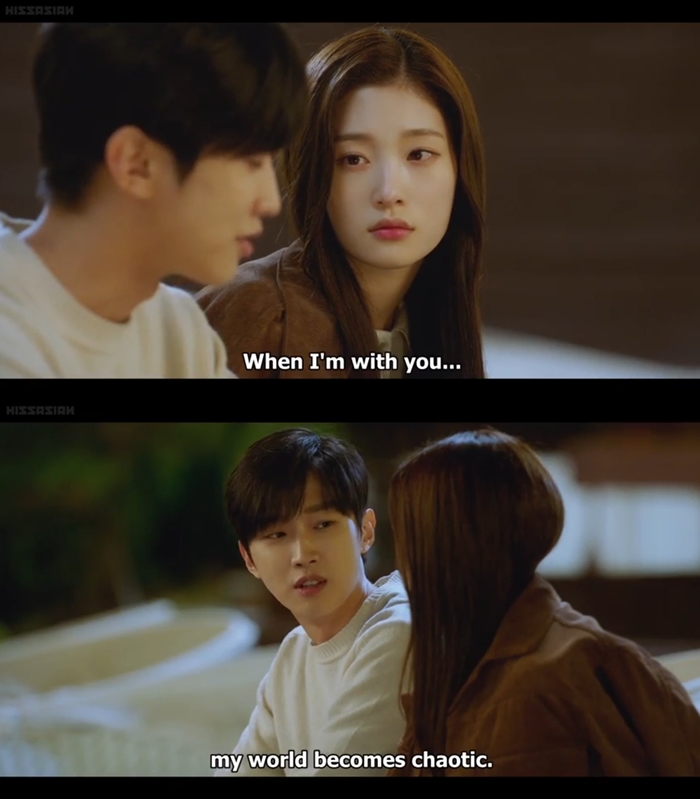 To you, what will happen in season 2? Who are you for?

Who are you for? 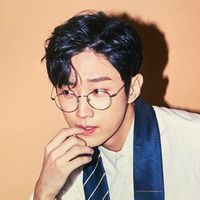 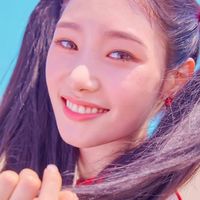 For me, ever since I watched the first episode I thought that chae Young and jisoo were better off as friends.. jisoo just doesn't seem like he loves her (seriously how can he like two girls at the same time).. jinyoung however has very genuine feelings towards her.. I mean it's okay to get jealous from time to time but at least he told her about it.. to me that screams true love??

To me it seems too cliché that the best friends end up together. (Just my opinion)

Hello, there is no mention of a Season 3. Hope this helps.

UPDATE: The season 2 will broadcast from July 26.
https://www.kpopmap.com/netflix-my-first-first-love-season-2-broadcasting-date-announced/

Ughhh I am also stuck in choosing who is the best because I'm a both fan of Ji Soo and Jinyoung. I want Ji Soo to finally have a girl but I also like how Jinyoung being honest on his situation. Haisshhh Help me! And please Netflix please release the remaining episodes I'm dying to see it. Only days had been left and classes will resume and for sure I can't keep my eye on this thing!

I really wanted jisoo to finally get the main lead role of having the romance in the end but ahhh after watching, I love her with jinyoung's character so so much!

Me too, at first i rooting for jisoo and chaeyeon. But as the story goes on, i think it would be better if chaeyeon end up with jinyoung. I love how flustered they were infront of each other.

I love this series I'm looking forward for
season 2come on Netflix don’t delay when is season 2 ...I have fell in love with a lot of series on Netflix and have been disappointed because they don’t follow threw with 2nd seasons.this is something I wish Netflix will correct every series on Netflix should have at least 2season or don’t add it to catalogue. It so frustrating to be into a series and you are left with no closure ? if Netflix can fix that I will never need cable and I will be very very happy

Lmao I wanted Jisoo to finally have his first main onscreen romance, but after watching the drama, I gotta say i'm team JinYoung HAHAHAHAHA

No,no,no,no,no,no,no
I am blocking all of my senses towards JinYoung's fans it is time for JiSoo to shine because i srsly had enough of him being the 2lead in every freaking drama, and anyways its obvious that she's gonna end up w TaeOh cause she started off w DoHyun and also the feelings that TaeOh finally realizes at the end...?

FOR REAL THO. LIKE I DIDN'T EVEN WATCH THIS DRAMA I JUST WANTED TO SEE WHO SHE ENDED UP WITH CUZ HE NEVER GETS THE GIRL DAMNIT.

I think, I can undesrtand both of them... First, a friend who wants to make sure to his friend be happy, second one, the boyfriend who feels unconfortable with his girlfriend's best friend, and it happens all the time in the real life, I guess that's why I'm really loving this drama. I mean, She said why she didm't love TaeWoo, She doesn't wanna lost her best friend... And then, there is a perfect boy, who can understand her, and soooooo sweet... who doesn't love him? The best part, he loves her too... i was telling my cousin... the first… Read more »

Hello, there is no mention of a Season 3. Hope this helps.

Will there be a s3

Hello, the season 2 will broadcast from July 26.
https://www.kpopmap.com/netflix-my-first-first-love-season-2-broadcasting-date-announced/

how can they do this to us though?! so unfair

Hello, the 8 episodes of the season 2 are already filmed however Netflix has not yet released the premiere date.

I know second lead syndrome can be hard but i find(on the few occasions it happens) that when the second lead does get the girl(or boy) i`m hugely disappointed...
My worse case for this was the fantastic Dream High...i wasnt a fan of the way it ended,ive always thought the wrong guy got the girl...

I still don't understand the end of the season! I still don't know who is the lead guy... but i wish she dated Do-hyun

me toooooo, I mean I love JiSoo and all and I always get second lead syndrome whenever he acts but here I just prefer songdo over teasing