5 Reasons Why BTS Is Different From Other K-Pop Idols 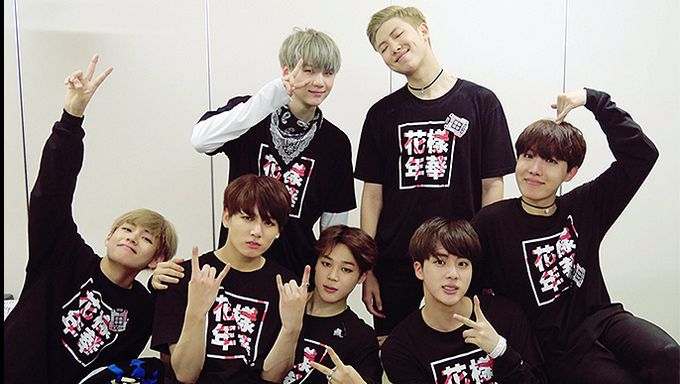 There would be no one against the fact that now is the prime time of BTS. Let's talk about what made BTS outstanding so far.

BTS is turning into world star as spending 6 months in a year touring abroad and the only continent they have never conquered is Africa. Now, they became not only Korean celebrities, while receiving tremendous amount of interest all around the world. As you know already, BTS won the prize at billboard music awards on May 21 as the first winner that takes place of Justin Bieber. For that fact, they got attention internationally. Then, what makes BTS so different from other groups in Korea?  K-Popmap listed 5 points of BTS.

First thing first, very different form other K-Pop idols who mainly target SE Asia or Chinese fans, BTS targeted American market directly. Because the half of members are rappers and hip-hop genre is more popular in US than any other countries.

2. Every member is talented

All BTS members are very talented. For example, Rap Monster is good rapper, composer, and also lyricist. Also, Suga and J-Hope started to rap and produce songs since they were teenager. This means that BTS can make their songs and many other things on their own without any help from others.

Strong synergy effect BTS creates is the most important reason why they got so popular. Members who mainly rap are teaching vocalist members how to sing and vice versa. All the parts of composing and producing music are being distributed to all of members and it creates a huge synergy effect.

However, eventually, the final point where fans are crazy about is their music. BTS's songs range from catchy EDM, hip-hop, trendy pop, rocking dance and various genre.  For these reasons, All of their songs are very easy to grab attentions. Additionally, their perfect choreography is the best.

Songs such as 'SPINE BREAKER' and 'DOPE' including social message based on real problems in Korean society get interests from not only Korean fans but also foreign fans around the world.  From foreign fans, they received lots of questions  about the reason why they write lyrics about deep social things rather than things related to love, party, and beauty  like other idol groups. Likewise, BTS always has been earnest and serious about their music.

I just want to say, AMAZING JOB BTS! You are DEFINETLY the most HISTORIC kpop group the market has ever seen. you make it right.

my babies are literally slaying it..... they will rule this world, and yes, i can give u that in writing. u may not believe it, but they are making music history! they have changed people's lives, including mine with their song 'on', which has inspired me so much to keep on fighting on with everything and never quit. i love them, they are my everything.

I started to love BTS through their music. They're totally different from other K-Pop groups or singers. They constantly send positive messages like self-love, self-acceptance, and self-empowerment through their music and performances. Lots of people got inspired by their moving lyrics. They also join UNICEF for campaigns against violence toward children and teens around the world. These boys are trying to make the world a better place through music. The fact that they contribute in song-composing and lyrics-writing makes them true artist. Not just singers, dancers, performers, or visuals, but true artist. I'm so proud of them and what they… Read more »

#1 is wrong. They didn't target the US market. If they had prepared for the US, they could have brought in some members from the US or written some songs in English in the first place. This much of their popularity in the US was just beyond their expectation. The reason why they started with Hip-hop was the core and the starting member of the group was RM, the rapper. When the producer Bang first met RM, he got so impressed and felt obliged to make this talented boy a debut, according to his interview. Then other members like Suga… Read more »

Thanks so much for writing this article !!!?

Hey! Yeah, Its' so true! Sorry about not mentioned in this article, but the fact that ARMY is so special in terms of BTS' Speciality couldn't change =)

Thank you for sharing your opinions! Sorry about that but you can find more interesting articles on our websites! Hope you all enjoy =)

I don't really see how this is any different from other groups...

Thank you for your opinion. Hope you visit us again soon:)

i think that Bang PDnim is one of the main reasons that make BTS succeed! seriously he created the group starting from Namjoon n his love n support for the group is so clear from the first day:)) He set a completely different path for BTS, which is not a very safe decision at that time, especially to a small company, he respects them n bts respect him like a father too, he give bts their own space to work, creat music, let them use their phones from training days n he didn't ban them from dating.....n so many other… Read more »

Thank you for sharing your opinion! I couldn't agree with you more! Your comments always help us to make better website <3

All of this is TRUE, BTS are amazing

Its suga not sugar

Yeah, you're absolutely right:) Thank you for your interest in our website!

Yes thank you for this, I agree completely but I habe one question; did you really write Sugar instead of Suga

Haha.. I think so:) Anyway, Sugar or Suga, Suga is sweet as sugar as you know! Thank you for your interest in our articles <3

OMG, Thank you for your compliment! Hope you visit us again very soon =)