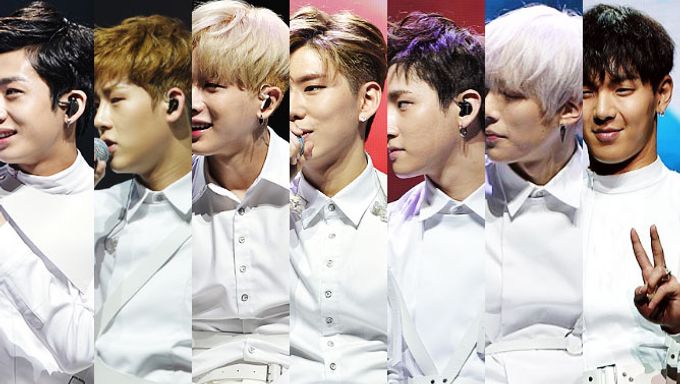 Kpopmap was invited to MONSTA X's The Clan Part.1 Showcase, and we bring you the 8 things only found at a showcase hosted by MONSTA X!

MONSTA X just made their comeback with their latest mini album "The Clan Part.1 LOST" and the title track, "All In"! We brought MONSTA X closer to the MON BEBEs through live feeds of the entire showcase through Facebook and Twitter at real time! Did you miss it? Don't worry! We've collected the entire video and review.

Must Read : Read the Exclusive Interview with B.I.G

The showcase was a huge success with numerous reporters from various news sites (and of course, Kpopmap!). The entire showcase was hosted by the famous MC and comedian, Park SeulGi, who gave playful back and forth with the boys. The members presented various clips, performed "Ex Girl" and "All In", and answered personal interview questions during the show.

All throughout the show, we couldn't help but have our eyes glued to the boys! But thanks to the undivided attention, we were able to find 8 unique points that can only be found at a MONSTA X showcases! 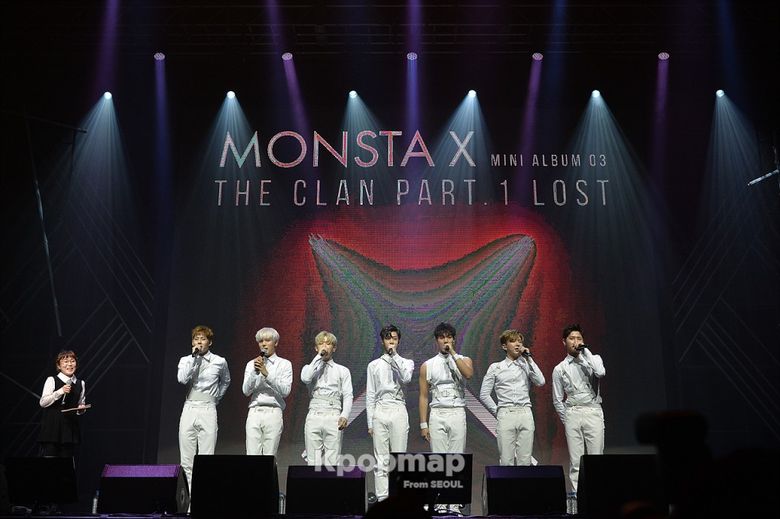 The MONSTA X boys are always challenging themselves, and the stage for the group is acting! The new MV for the title track, "All In", features the acting skills of all 7 members. The boys had each portrayed a character with a unique sense of hurt in life. Although all the members were complemented by the MV director for their acting skills, HyungWon showed the most potential for his portrayal of a son abused by his parents. He says it was probably because he keeps losing weight, making him look weak. 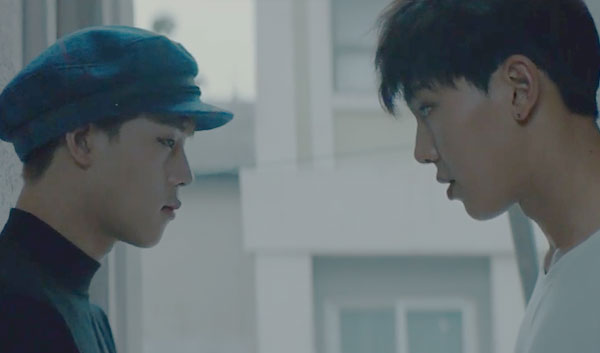 One thing we love about MONSTA X is their powerful kalgunmu dances (synchronized dance). Throughout the showcase, they performed their two main songs: "Ex Girl" and "All In".  Watching both performances, we couldn't help but be mesmerized. They danced as if they were one body with perfect timed choreographs. Seriously, we just couldn't! 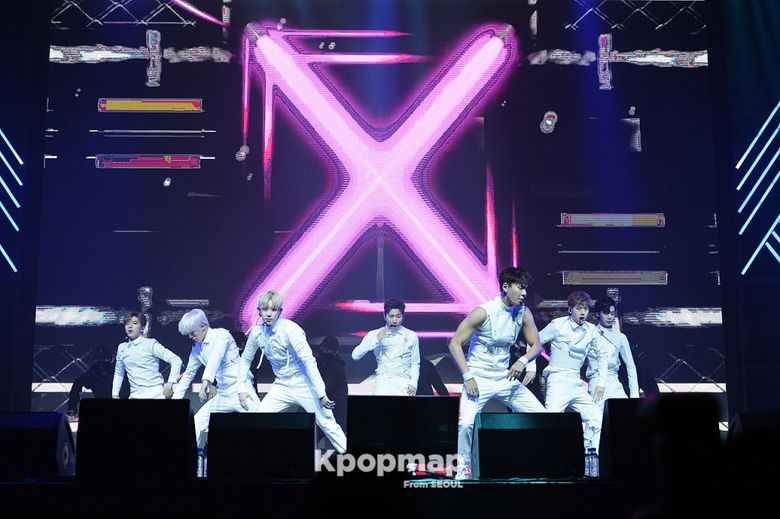 There's nothing sexier than a man with bulging arms. Shownu showed the audience some skin with a sleeveless shirt that accentuated his muscular arms. He sure has been working out! Shownu revealed that the shirtless looks were a part of their concept for this album.  That means we'll be able to see more shirtless MONSTA X boys! A funny inside story between the members (excluding Shownu) was that KiHyun asked their stylist to make Shownu wear the shirtless look first, because of his muscular build. Thank you KiHyun and thank you stylist!

Talk about seductive! The boys had taken our breaths away with the reveal of another concept look that took our breaths away. Shownu and WonHo had given the audience a peak of their back, and low and behold...their back cleavage! The boys will be showing us more back cleavages as another concept look for their comeback. The stylist had especially coordinated the look to highlight the members' Back point dance for their song, "All In".

These boys are handsome, talented, funny, and cute. Add respectful to that list, and you've just the perfect MONSTA X members! The boys were completely and utterly respectful all throughout the showcase as they never forgot to bow when they entered and left the stage. They had also thanked the press for every question and attention, while maintaining eye contact. The members also remembered to show respect for their fans for the love and interest that had allowed them to come this far. WonHo had expressed, "We are always so thankful to our fans. We are here because of them. We want to continue to grow and become better for our fans." 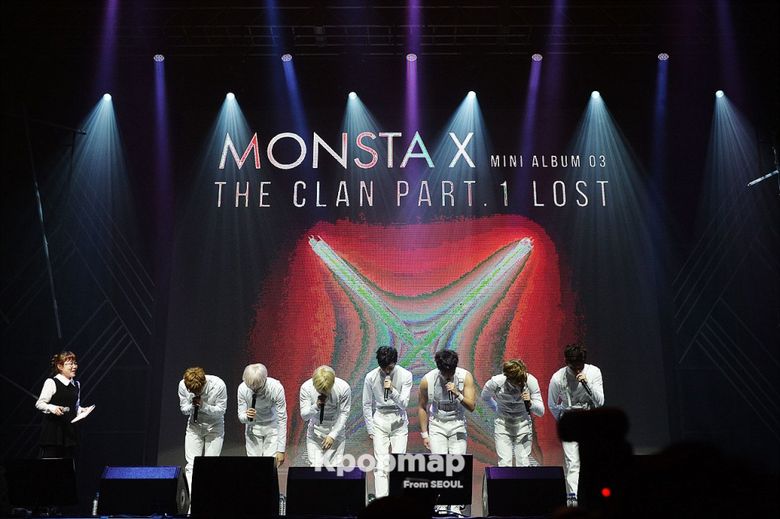 Oops! It seems I.M had lost weight or wore another members' pants, because his pants kept falling down! The host, Park SeulGi, had pointed out that I.M kept pulling up his pants. The members and the audience got a good laugh at the adorably embarrassed I.M, who tried his best to stop touching his pants. We don't mind, I.M!

Each K-Pop choreography has a point dance move that is memorable and highlights the song. Rejoice dancing MON BEBEs! The choreography for "All In" has a total of 3 point dances! Shownu showed us the first point dance, which was the All In dance that features the use of arms. The next point dance belonged to KiHyun, called the Heartattack point dance. The dance highlights KiHyun's part as the members hit their chest while executing waves. Lastly, the Back point dance completes the set with the boys doing their sexy body waves, while facing backwards. Be honest, you're gunna try these point dances out at home. We won't judge, because we've already tried it ourselves! 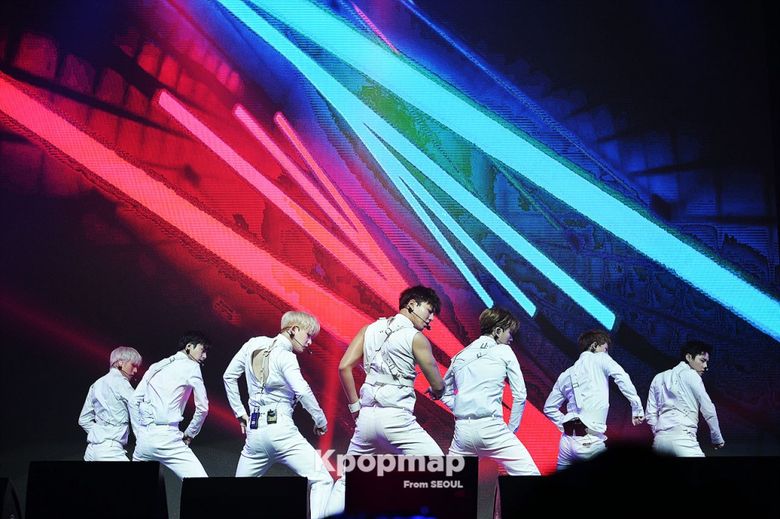 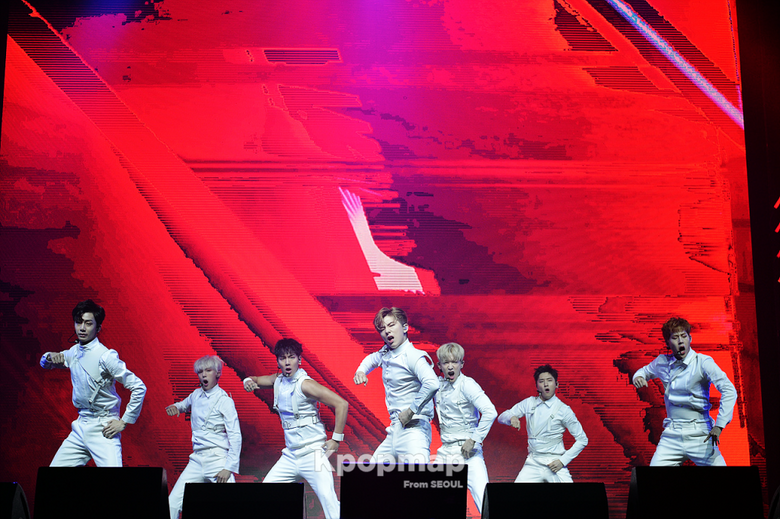 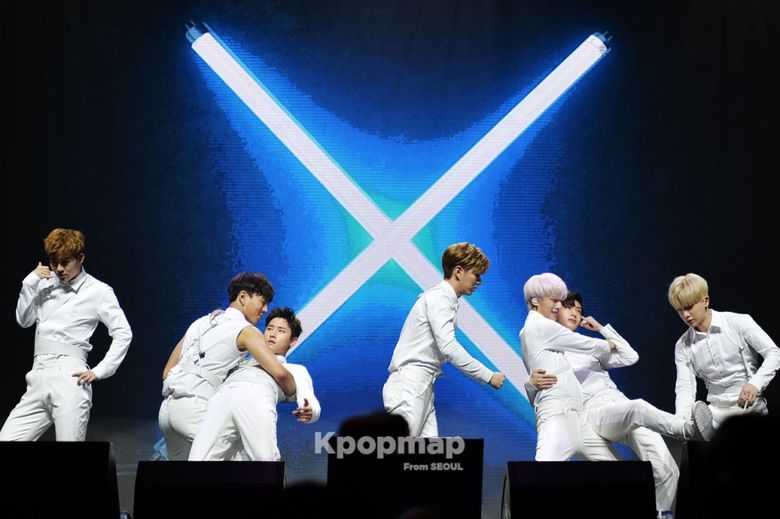 MONSTA X shows that they're a unique boy band that have a flavor of their own, and we were lucky enough to get a full blast of it! Make sure to check out the boys' "All In" MV, as well as their newly released mini album "The Clan Part.1 LOST"!

Make sure to stay tuned for our next showcase live feed!