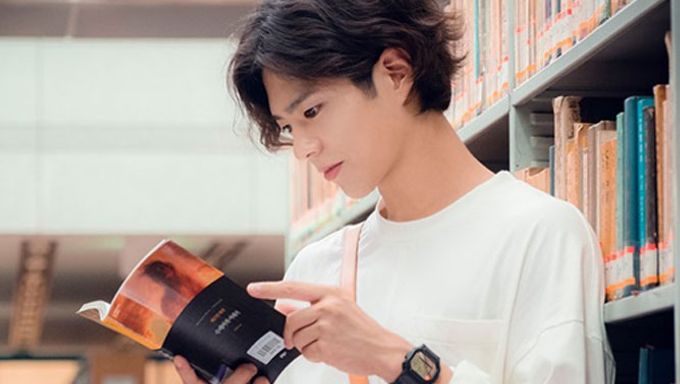 "Encounter" previously called "Boyfriend" is a highly expected tvN drama starring Song HyeKyo and Park BoGum. Many fans are waiting for it.

The romance drama tells a beautiful and sad destined love story. It is the accidental encounter of the daughter of a politician and an ordinary man that have different ways of living. For more information and pictures about the drama, you can check our cast and summary here.

Not too long ago Song HyeKyo's first still pictures were released, today it is the turn of Park BoGum!

Park BoGum is acting as Kim JinHyuk, an ordinary pure young man who lives happily. In the still pictures, he is reading books in the bus and at the library. He is a young lover of literature. The actor is a handsome man with a lovely smile in these pictures.

His fashion also grabs the attention with a white tee-shirt, cotton pants, cross bag, and a sports watch, he seems like an active and free person. His long and curly hairstyle gives him a gentle vibe too.

"BoGum magic" is already strongly back. With his fascination looks and great acting, many viewers will fall for him even more.

The drama will premiere on November 28th on tvN at 9:30 pm KST. It will be a Wednesday-Thursday drama and will broadcast after the drama "The Smile Has Left Your Eyes".