Boy Band CNCO Under Fire For Interview That Involved BTS 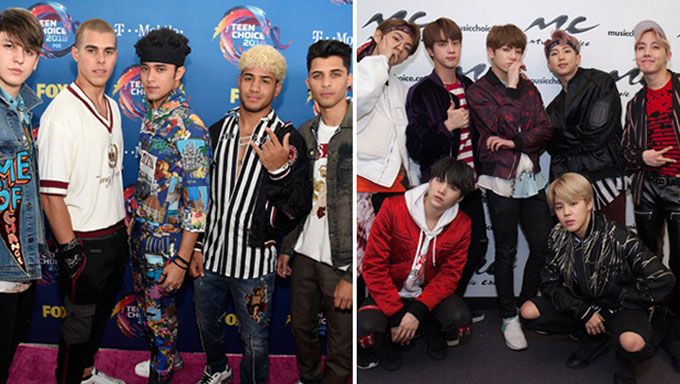 CNCO has recently caught the attention of South Korean netizens and ARMY. But unfortunately, not exactly for a good reason. According to fans and netizens, the Latin boy band reportedly mocked K-Pop boy band BTS during an interview.

An audio recording with translations surfaced online and they could be heard mocking BTS's and the Korean language. Needless to say, fans and South Korean netizens were instantly triggered.

Additionally, the two boy bands are currently both nominees for the Best Boy Band Award for this year's iHeart Radio Music Awards. While some are accusing CNCO of badly attempting noise marketing, others have stated that such isn't really the case as their YouTube video views already have a good few million views anyway.

What is your verdict? Let us know!

Hello everyone CNCO shouldn’t make funny of another cultural and I am EXOL when I hear it I was shocked and disappointed ☹️ how they can say that and they are good but they shouldn't make fun of another. What if we KPOP fan make fun of another artist and I am not saying what another fan said about CNCO was good but they are right in some point CNCO shouldn’t Start in first place. If they did and they should say something good about BTS and another Kpop artists. You guys don’t know how hard Kpop trying to make… Read more »

me, as an army and cncowner, i do like cnco more since ive supported them since 2015 and wayyy before bts. in my personal opinion, i do not think cnco said those things on purpose you know. they didn’t mean it in an offensive way. they are both famous we get that, but they are it enemies. cnco didn’t really say anything bad.

I know but they shouldn’t make fun of korean language. KPOP artists loves Spanish song they didn’t make fun of them. I am not fighting I am judging saying what should say that.

I'm sorry but I think everyone is just saying thing that they don't mind because if you speak their language you can understand them because who did said words that are racist was Enrique and second I think everyone have to chill down because that translation is bad .. and they said "we don't like that comparation but.." and they said too "We like what they do they are really nice and they are really good and they are really talented " soo please learn the language please because some people are ignorant and can manipulate the translation ... so… Read more »

I love bts and cnco but i love CNCO because they did not do this and why would cnco do this to bts like i'm a army but its just not right but and cnco is my favourits boy band and yes they did mock bts can't we just drop it? Like no one ever cares when a politican or some Important person like that makes racist comments and yet when a Latino band does it it lik the world is crashing down it was one off they have never done it and will never do it agian and to… Read more »

Are they even planning to apologize? Not just to BTS but also to other koreans.

They should apologise to all korean and kpop artists. It was not acceptable

Do you speak their language ??

CNCO is my favourite boy band, and yes, they did mock BTS. Can't we just drop it? Like, no one ever cares when a politician or some "important" person like that make racist comments, and yet when a Latino band does it, it's like the world is crashing down. It was a one off, they have never done it before and will never do it again. And to the people who are saying that CNCO is trash, I'd like to hear you sing. Please, post something of you singing. Cause you can't judge these amazing singers if you have a… Read more »

Uhmmm. What they did was still wrong. Im not saying this because im an army. Yes I know that people shouldnt disrespect them. But i mean its what they did to BTS and other koreans. I do admit that the mc started it all. But they still shouldnt mock a different language. And just because both bands are in the same category doesnt mean that they are in the level. BTS worked very hard coming from a not so popular country to be known in the world. While CNCO can be easily recognized as their country is not far away… Read more »

yeah right, the band is okay but the fandom isn't, it's always the other fandoms that come to us then ARMY's get the blame tsk

It's disrespectful and unprofessional AF. You don't climb your career ladder by knocking down on others. Support whoever you want without shame or judgements from others, but realize and learn from your group's mistakes. If not, you're just supporting unacceptable behavior of stereotypes and ignorance that only contribute to the amount of negativity in the world. Let's be clear on one point: trashing and death threats towards CNCO is not okay nor an acceptable response in any way. However, the host and the boys need to learn that what they did was ignorant and not okay. Don't sweep it underneath… Read more »

Wow this is just disrespectful as heck. ARMYs, BTS, and Koreans are all offended. I am sorry to Koreans, ARMYs and BTS, for my native people. I am an ARMY myself and I'm Mexican. I just wanted them to stop.

WOW RUDE MUCH!!
there just jealous that BTS is better then them! that's quite racist too
like if you agree

like they think they’re better?? I barely even know them. They should’ve never done that becuz they will regret it. They act like they’re better than BTS hahaha

cnco has never won a billboard award for top social artist and they have never been on american talk shows and their country is closer to us and asia is on the other side of the world and they won llions of awards i didnt even know about cnco until i heard about this so cnco can go die in a whole and cnco who?

Drop it already, nobody knows who CNCO is, and frankly none of us care. bts is more important than them, like they've acheived as much as bts? lol bunch of ugly bastards

They shouldnt have started it in the first place.

Um, excuse you! You're saying that CNCO shouldn't have made those comments, but you're here judging them. IT WAS A ONE OFF! When are you people going to learn? Maybe pull your head out of your ass, and see other people's opinions, you idiot!

I'm Latina and I'm disappointed in CNCO they should not have mocked them but not only them all koreans but I honestly don't think that they meant it that way maybe they were just playing around. I'm an ARMY and I always will be but like I don't think that we should start a stupid fanwar over it. We already had one with EXO-L's and that is still going on I just want ARMY's to be that one fandom that can not care about what other people say and to watch and listen to BTS happily and CNCO fans I… Read more »

CNCO is like my all time good and BTS too but like i 'm hella dissapointed in them.

??? bts is out here making millions and breaking hundreds of records and i didn't even know about CNCO till now.

Can i give you advice?
Sis, don't criticize other people if you haven't looked at yourself.
P.S. Its shitty not shit. 🙂

Sorry, just a question. Did your mother teach you what grammar and punctuation is? It seems to me like she didn't. Yours is pretty shit

you should. A Latino boy band that (whenever a song is released) has millions of views in the first five minutes of being released for viewing and downloading. have you been living under a rock, hun?

EXCUSE ME?
i think..

not.
BTS WILL ACHIEVE BILLIONS OF VIEWS ONCE PEOPLE REALIZE HOW GREAT THEY ARE AND HOW HARD THEY WORK

still dont know who they are

Some boyband who has songs with billions of views! In which BTS will never achieve.

Well my friend love it but idg

They are talking smack when barely I just heard about them in the interview and they're saying BTS is a mimic......wow BTS is known all around the world as they are my favorite group while CNCO is barely known cross country.

Im laughing and saying who's cnco and it's pretty offensive to mock the Korean language and yes even though I'm not Korean I'm still a different culture in the Asian race and pretty much cnco is racially offensive to South Korea and the army.

And one thing though bts is knowned world wide u look at cnco this, wait what's cnco

Bts deserves the win. End of the story.

they have really no respect for anyone. They can never be a biggest boy band. No man can go forward in life by insulting othets. My BTS is best. A singer shouldn't have a nice voice also they should have restpect,honesty,love and nice character which all have in my bangtan boys. And yes I am an army and always be. I am so proud for being an army. I will always support my boys.❤❤❤❤ My BTS

disrespectful. not even just to fellow artists, but to korean ppl as a whole....

This is ridiculous not only were they being racist to BTS but Koreans as well?!?! srsly some people should know their limits.

its been over a week and no word from the cnco company, hmmm......

this is disappointing, I'm Latina so I understood everything, this is just plain ignorant and not just CNCO but the hosts as well should be ashamed for asking how do you say mamacita in Korean when you know good and well they don't speak it, I'm extremely disappointed because the Colombian (the one in the hat) actually has listen to kpop and likes it (blackpink on Snapchat) but instead this...

Wait omg how did you know Joel likes kpop? (I am a fan of both bts and coco)

Finally someone who understands cnco.I get what you mean xx joel(the mexican) actually likes kpop. What they did was extremely dissapointing, I hope they resolve this

I am a Latina as well and I agree with Olive Candy its really disappointing to hear this especially how the host leads them knowing well that they do not speak Korean and the thing is that they follow along. It should have clicked in their heads that that was is not right and stopped it there by saying we do not know. It is a disappointment and disgrace to any latin community.

Ive seen/heard CNCO they were guests on the finals of The X-Factor ...not my thing but they were good,have to say when they came on i thought they were Korean(only for a sec) what they did aint cool but some people do really dumb things at times..