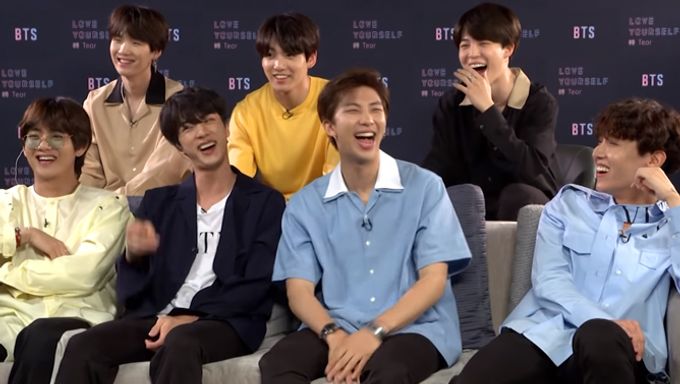 BTS is making headlines ever since they have made their way to America for the attendance in the upcoming Billboard Music Awards 2018 (BBMAs).

They have been invited and will be heading to radio stations and shows such as "Radio Disney", "The Ellen Degeneres Show", Buzzfeed, ETNews and so on! With such amazing schedule ahead, they seemed to be having a great time.

"Radio Disney" shared some of the videos taken on their Instagram story. They were asking fans to vote on which artists should do a remix with BTS and they also showed the 'ritual' they always do before going on stage.

Photos of them behind the scenes were also uploaded and fans could not help but comment on how happy and proud they are to see them making their name in the Western entertainment industry.

Many of the interviewers have also uploaded pictures of them taken together with the 7 boys.

Some of the nicest guys I’ve ever met😊 @BTS_twt #BTS pic.twitter.com/HBgHu9X7pi

In addition to how they are making their name, BTS had also sat down with an interview with "Access" and talked about the "Purple Ribbon Army" organized by the fans in LAX Airport earlier before.

They were surprised and touched at the same time by fans who had spent the time and effort to ensure their safety in crowded places. Apart from that, they also shared their favorite body parts which earned laughter from the members themselves.

Moving on to the new album which will be released on May 18th, BTS gave fans a slight preview by talking about what the new album will be about in an interview with ETNews.

They will be coming back with title track "Fake Love" and appearing on BBMAs on May 20th (local time) as one of the nominees of the "Top Social Artist Award".