BTS Takes Over Twitter With 17 Million Tweets in 48 Hours 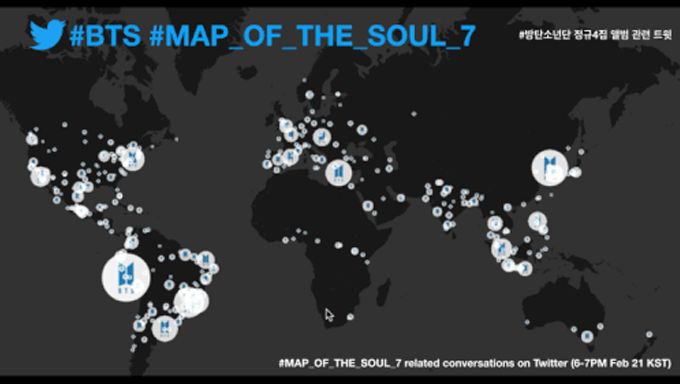 Global superstars BTS (@BTS_twt) released their highly-anticipated album, "MAP OF THE SOUL : 7" on 21 February, 6pm (KST), and ARMY all over the world naturally took to Twitter to rave all about it. From 21 February 6am to 23 February 6am (KST), 17 Million BTS-related Tweets were generated within 48 hours.

Tweet volumes peaked within the first hour when the album was released, generating 1.2 Million Tweets from 6pm to 7pm (KST) on 21 February. The Top Tweet from BTS (@BTS_twt) official account was 'D-Day', announcing the day of their comeback with a series of photos including a selfie from RM and various artworks.

My guys from @BTS_twt out here killing it. Congrats fellas.

With the BTS ARMY going wild on Twitter, the top hashtags excluding #BTS and #방탄소년단 was the album title #MAP_OF_THE_SOUL_7, Next on the list is #BTSComeback2020 and lead single, #ON.

Fans all over the world turned to Twitter to join the #MAP_OF_THE_SOUL_7 conversations and #BTS updates. Come and join Twitter conversation today to see and talk about your favourite Kpop idols and stay updated everyday with other Kpop fans around the world!