Actor and model Byeon WooSeok is rising in popularity.

With his model figure (187cm) and his good looks, he stole the heart of many. Byeon WooSeok has been active in his model activities with for example Hera Seoul Fashion Week: Ordinary People.

A few months after his model debut, he fulfilled his mandatory military service.

- Live Up to Your Name (Minor Role) 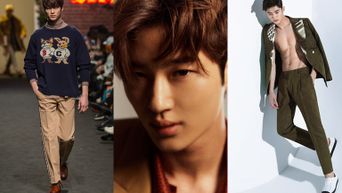 […] the put up, actor Byeon WooSeok, who belongs to the identical firm as Lee YooMi, Varo Leisure, commented “자알 […]

He's super handsome and acts so well! Wishing more lead roles for him. 😍

Byun Woo Seok is the handsomest man I’ve ever seen in K-drama. He’s just totally charming as well. Very fine actor, so natural and at ease in every role. Must be the modeling background. I wish I could see him in more films.

Appearing 10 seconds in one episode of a 20 episode drama can be called "support role"??