If you're looking for Gong Myung(Gong Myoung)'s profile, come here.

Unlike his cute appearance, he is 183cm tall and has a wide shoulder frame, which is loved by many fans.

He debuted in the web drama "After School: Lucky or Not" in 2013, and since then, he has been working hard in his acting career by appearing in many films and dramas.

The public started to recognize him as the movie "Extreme Job" (2019), which he appeared in, had exceeded 10 million viewings.

In the meanwhile, his younger brother is DoYoung, a member of NCT. It is known that DoYoung and Gong Myung are very close to each other and have barely fought while growing up. It is said that Gong Myung has taken care of DoYoung well since childhood, and DoYoung is also said to have followed him well.

Toy - Three Of Us (With Sung SiKyung)


The Bride of Habaek 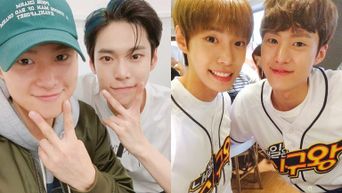 Netizens Believe That NCT's DoYoung And His Brother, Gong Myung Are Blessed With Good Physique

The Second Lead Couple That Was Loved As Much As The Main Couple In The Drama! What's Your Choice?

Netizens Believe That NCT's DoYoung And His Brother, Gong Myung Are Blessed With Good Physique