There are many handsome actors in South Korea, but Hyun Bin is a charming actor who is famous for his deep voice and excellent expression of emotions with his eyes.

He made his debut in 2003 by appearing in the drama "Bodyguard". After this, he appeared in "Nonstop 4" and gained popularity, and then acted in the drama "Ireland ". Thanks to that, he won the newcomer award at the MBC Drama Awards that year.

He used to play the cold character Hyun JinHeon with the nickname "Samsik" in the 2005 drama "Secret GardenMy Lovely Sam Soon". The drama "My Lovely Sam Soon" saw the wave of "Samsik" nationwide with an audience rating of 50.2%, and this drama was also popular in Japan. Hyun Bin attracted attention as a next-generation Korean wave star.

He played the role of Kim JooWon of "Secret Garden" in 2010, a rich and arrogant CEO with a trauma. With the drama, he created buzzwords such as "Is this the best? Are you sure?" and "This amazing woman". He left a lot of well-known topics such as his shining sweaters, the kiss scene with cappuccino foam, the scene where he works his abs, and more. The drama was incredibly popular in and out of Korea.

And on January 1, 2021, he officially revealed that he was in love with actress Son YeJin, with who he acted in the movie "The Negotiation" and the drama "Crash Landing on You".

Let's take a look at his filmography!

Herb - It's my fault 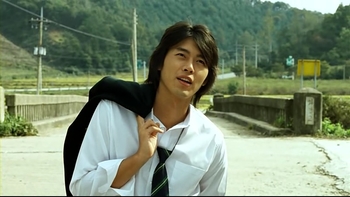 The World That They Live In

Crash Landing on You

6 Older K-Dramas To Watch That Will Never Get Boring

These Korean Actors With Dimples Make Our Hearts Flutter