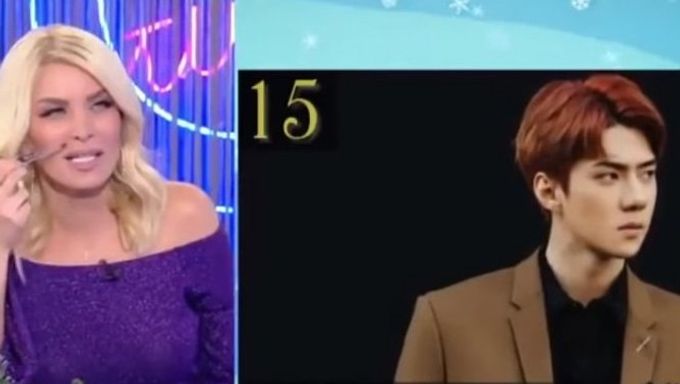 The Greek TV show ''Eutixeite' has recently been one of the most talked about and hated shows by K-Pop fans at the moment.

The hosts of the show blatantly insulted EXO, Wanna One, and BTS members who were included on TC Candler's '100 Most Handsome Men in the World', making racist and homophobic comments towards idols such as SeHun, V, Kang Daniel, and more.

The show host, Katerina Kainourgiou, revealed that she has been receiving quite a lot of threats from K-Pop fans after the incident while apologizing for what she had said.

However, some fans are still unhappy as they feel the apology was half-hearted. They criticized the host again for labeling her comments made towards the idols as "humorous".

(pt1) A translation of what Katerina Kainourgiou had to say today in her show #eutixeite about everything that's happened the past few days - she not only didn't properly apologize but she didn't even acknowledge Sehun or Kang Daniel, said their names wrong, made a "tribute"+ pic.twitter.com/qUTo1eovcE

What do you think about the situation? Does the apology seem half-hearted?

What a fucking bitch. Humoristic comments you say? That was blatant racism, hatred, and xenophobia. Disgusting. The only thing humoristic is the irony that people like you actually still fucking exist. You'd think this shit would stop eventually, right? Nope.

OMFG I AM PISSED
like how do you pronounce jungkook incorrect?!??
and FYI THEY AINT CHINESE!!
im Asian and Chinese ain’t the only country people!!!
AND there is no photoshop!
i guarantee that her face is fake/ photoshopped
like her face is just plasticky looking
we luv u our awesome unique special boys!!!!

she actually had plastic surgery, so you are right

She chose the wrong fandoms to mess with.

She seriously started a fight against Army’s, Exo-L’s, and wannables... honey I’m praying for u ?

Sekoon?? One on one?? Bitch! U can't even pronounce their name!!! GO TO HELL! We don't accept your Apology!!

Please tell him, Yoongi says he can make his girl scream louder than he ever made by just clicking the follow button on twitter ???

I honestly don't accept her apology. This was so disrespectful and rude...and she wonders why she got threats...