Is IZ*ONE Jang WonYoung Fake While Also Having Attitude Problems? 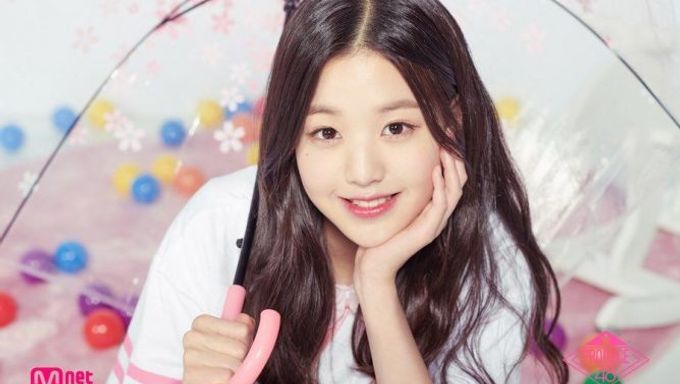 Jang WonYoung, the center position idol for the girl group IZ*ONE has been receiving quite a bit of criticism from South Korean netizens lately.

Many have criticized her for not showing any respect towards those who have been in the K-Pop idol business for much longer than her.

In addition, behind the scenes footages for the photo shoots of their debut album COLORIZ seemed to show what some netizens call "true colors". Ahn YuJin joked around with the other members and called herself the leader of the group as she was wearing a strip that was different from that of the other members. While everyone seemed to be laughing and having a good time, Jang WonYoung was seen glaring at YuJin.

Do you agree with the people who are claiming that Jang WonYoung is fake and is pretending to be an angel on the inside but is actually unpleasant on the inside?

dude she has dry eyes?

Is it serious that there is a website reporting that WonYoung is rude? My God.  Do the criticisms come from people who are 100% of the time looking at absolutely everyone with a smile? I think not.  Being idol is a stressful thing. You get hate every day, rehearses for hours and hours every day, has an extremely busy schedule to fulfill, IZ * ONE is a group full of controversies because of Produce 48, and you really want her to be smiling and jumping ?  K-idols are human like us, non-famous people. They have bad days, good days, tired days, joyful days, stressful days… Read more »

Yeah, right, go for trouble with that kind of bullshit ! Cuz not enough kpop idols have committed suicide yet you wanna start a fuss with some fucking gossip, right ? You fucking pieces of shit, just shut the fuck up.
That's journalism ? Talking shit about a 13yo ? Come say that to my face, I'll give you my opinion.
Fucking assholes.

she knew there was a camera in pd48 so she acted sweet all the time. puberty? yujin was fine. haeun was fine. all the younger trainees were fine. but wonyoung? i don't see what's so hard about controlling your facial expressions around seniors if you can act fake on stage.

she knew there was a camera*

Okay, from the first time I saw here in Produce 48 from first episode until the last episode IDK why I always felt uncomfortable everytime I've seen her..and the only word come through my mind is FAKE.. that's it! *Sorry* I hope she can be change once she had more experiences..otherwise,,her carrier in this industry could be over soon..

I feeling the same when I saw her. She's really pretty kid and so sweet. But her smile doesn't look sincere too me.

I forgot what show it was but a member actually said stuff about wonyoung going through puberty and changing attitude wise(being more moody). Also watch the episode of izone chu where they play the telepathy game for rice cake ingredients, when they're all eating, hyewon steals the cheese off someone else's spoon and wonyoung gives her a REAL dirty annoyed look. She's too young to be able to control her emotion 24/7 and keep a poker face in front of the camera. Her puberty leaks sometimes.

People are easily to misunderstand, she still our little Pony ?? she still have more growing and experience. Can't miss judge her.

People can say "she has dry eyes/ not comfy lenses" but look at her whole expressions with the smirk on her side lips. After this, she got caught being rude to Sakura & Nako too .

also, that sakura thing is stupid, why would she act rude to her when they were more than 50 cameras there? doesn't make sense also, you're so dumb to believe that she acted rude to nako THEY WERE PLAYING THAT GAME WERE THEY KEEP A POKER FACE AND NAKO WAS WATCHING THE MEMBERS CAREFULLY TO SEE WHO LAUGHS AND WHEN WONYOUNG WAS ABOUT TO LAUGH SHE TURNED AND SAW NAKO IN HER FACE SO SHE MADE THAT POKER FACE SO NAKO WON'T SEE HER LAUGHING plus, nako (and the other members too) made those faces so they won't get caught… Read more »

lmao literally 2 seconds after this she laughed at what yujin said and we all know how close yujin and wonyoung are. yujin said it herself

I agree. The rapid blinking was a nervous reaction cause she realizes she smirked right on camera to yujins comment

In the video you can see Yuri was saying something to wonyoung but Wonyoung's distracted because of her lenses. Her eyes are glassy and teary, she's clearly expressing discomfort and trying to get them back in place by quickly blinking, repeatedly. She often does this, as seen in many videos and gif's. Do you people even know what glaring is?

Why is she receiving so much hate? I mean ive never seen my baby disrespect someone and about that vid with yujin yall went to puberty ryt? maybe shes too young to control her emotions or maybe shes just tired she needs rest stop hating her jsjsjs how could yall hate someone that cute,innocent and pure. She wasnt called 'born to be center' for nothing

I'm going tbh,I really like their debut song.But this shit it pissing me of like.she is literally the youngest in the group,but she doesn't respect the olders and her seniors,I can't believe you guys voted her

she is literally 14 years old... you have to be some sort of pathetic freak if you have never felt emotions other than happiness when you were growing up. she has been respectful to her members many other times yet you decide to pick on her from ONE incident? get a fucking life

Since "that shit" bothers you so much, why did you bother to research about it? To try to have an argument to say "I hate this girl"? At least she is beautiful and talented enough to have votes, but you ....

lmao I saw the reality show but you guys are really taking a one second shot to say she's being glaring or disrespectful.... ok then it could be anything really, she could be tired, not even paying attention and lost in thoughts, silly excuse but she could literally have something in her eye or be in pain, or just in a not so good mood it happens, it's not like she insulted anyone. I didn't even think she was looking at Yujin at first and yeah, I'm a IZ*ONE stan, but it doesn't mean I'm biased, I'm just really tired… Read more »

I'm not a fan nor an anti, but I'm so annoyed over people using her age to defend her BOA WAS 14 WHEN SHE MADE HER DEBUT IN JAPAN AND SHE WAS FLUENT IN JAPANESE

you sound dumb as fuck <3

What does this have to do?

Not sure what does being fluent have to do with someone's attitude or maturity... if you want this kind of comparison, Wonyoung can speak English yet it's... just not really related to the issue here

What do you expect from 14 years old undergoing puberty 14!! Let her grow

No wtf??? Even 14 years old respect the olders but she cant???? wth . Yes she is undergoing puberty but she needs to learn her lesson

What the hell... Didn't Yuri say that she (Wonyoung) was undergoing puberty? Even saying that Wonyoung was somewhat acting cold towards her, but she laughed it off. Well, of course Wonyoung will be like that sometimes, just like any adolescent would. Even if she's an idol, she's still a human being, and a young girl at that. So please, don't write this without getting your facts straight, and please excuse her actions.

Yuri was also saying something else, that smirk can mean anything, or she could have looked at another person who was out of frame., at the same time, she was blinking rapidly which could only mean eye discomfort, and we know that idols wear contacts often for many reasons. The only way we know the truth is from the people around her or Wonyoung herself to clarify this.

Find me another clip with her 'eye problem' where she smirks like this video. Case closed

she has problem with her eyes n becomes her habit. she did it many times if u can notice.

Don't excuse unacceptable behavior, she's turning into a diva and the other girls have to up up with her. It can be an unpleasant 2 1/2 years for them and if it was a small group like D-UNIT her actions could jeopardize them all, like U.Ji did.

LMAO "unacceptable behaviour" are you fucking dense?? she didnt murder someone its not the end of the world?? "diva"? you have got to be kidding me. shes going through puberty as a 14 year old girl?? has some compassion for someone who is a LITERAL minor.