When idols become more and more famous, it is hard to stop their fans from having dating fantasies with other idols. Especially with top groups such as BTS and TWICE, it happens much more easily.

In the case of BTS’s V and TWICE’s NaYeon, they are known as ‘chinggu’ or friend in Korean since they were both born in 1995. However even with V as a senior 2 years older than NaYeon in the industry, their pairing seemed to be well-received by fans too.

For those who have been a K-Pop fan for a while, you must know about the catchphrase of TWICE’s ‘Cheer Up’ as ‘Shy shy shy’. There has been many occasions that V was caught doing it.

During a fansign event, V was doing it with other BTS members.

At KBS “Music Bank” backstage when TWICE and BTS were seen together introducing their songs, V was seen to follow the actions of “Knock Knock” when TWICE did their introduction.

For more recent occasions, during Gaon Chart 2017 when TWICE was performing to ‘TT’, V was seen imitating NaYeon while sitting down with the rest of his members. Also during Melon Music Awards 2017, fans were also presuming that V was waving his hands lightly after seeing NaYeon on the big monitor doing the same.

As for NaYeon, she was also noticed by fans for dancing to BTS ‘Fire’. When TWICE was guesting on MBC “Weekly Idol”, NaYeon was seen at the back dancing to ‘Fire’ when the song was played.

The part she was dancing is known as the ‘333’ dance by fans.

When she was waiting backstage for her performance, she was also caught grooving to the song by fans.

In addition to her love for ‘Fire’, she has mentioned about the song on two different occasions. The first time happened when TWICE was on SBS “Cultwo Show”. NaYeon mentioned that when she was sick and she felt as if her body was burning up and thought about the song ‘Fire’. Her answer gave laughter to her fellow TWICE members.

Another time recently on MBC “FM4U” radio show, NaYeon mentioned how during the winter when she was sleeping, she had used the electric blanket to keep herself warm. However, due to the high heat, she was perspiring!

When the members told her later on that she was singing ‘Fire’ in her sleep, she was surprised and laughed at herself.

Of course, this is not all from the two of them. In addition to just this few incidents, fans are sure that they have much more interactions at back stages of music shows and other common events.

During MBC “Idol Star Athletics Championship” in 2016, both TWICE and BTS were in the same team. They were cheering and supporting each other when participating in different sports event. 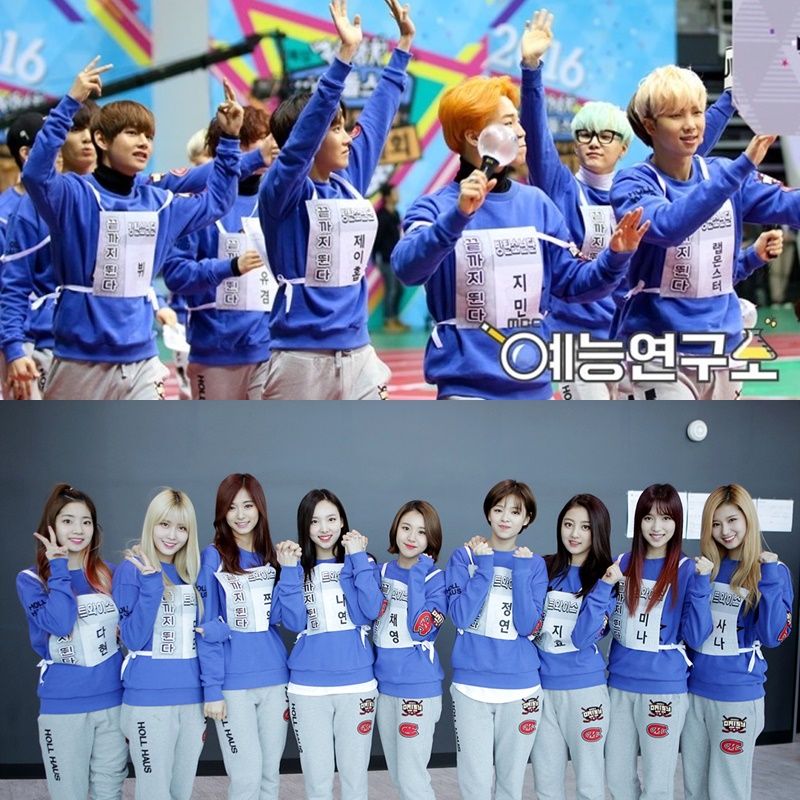 When TWICE was asked about their ideal type on KBS “Sukira”, NaYeon mentioned how she prefers someone who is trustworthy and dependable. She also hopes that her other half can take care of her well. As for V, it was known that he prefers someone who has a lot of ‘aegyo’ and can take care of him. It seems like the two of them have the characteristics of each other ideal’s type.

Well, you can never know for sure.

All in all, we hope that both groups will continue to succeed with their amazing results.

What has TWICE been doing?

TWICE has came back recently with their title track ‘What is Love?’ a week ago. They will also be holding their world tour, ‘Twiceland Zone 2- Fantasy Park’ on May 18th with their first stop in Seoul, South Korea. They will be heading to other countries such as Japan, Singapore, Indonesia and so on.

What has BTS been doing?

I love it taeyeon

Sorry to ONCE’s out there but… I really hate Nayeon and love Tae Tae so I really want to sink this ship.

Wow, you’re disgusting, honestly. You really shouldn’t be commenting things like this. The fandoms are getting along just fine while people like you are just being a big thorn in their way.

personally i don’t ship it. i think adding the fact that nayeon likes fire should be cut out, simply because it’s a song and anybody can like a song. i feel the same way with the other bts members doing the cheer up dance because you would be able to ship any of them with nayeon at that rate. in my opinion i see them as friends