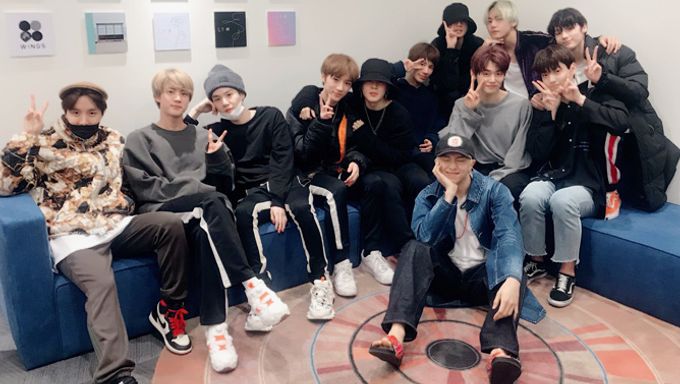 On Mar. 7, the freshly debuted TXT uploaded a picture together with their seniors, BTS.

In the tweet, the boys thanked BTS for providing them with sound advice and also supporting them for their future activities. Fans of both TXT and BTS could not help but feel a sense of heartwarming as the Big Hit family has finally united.

Speaking of family, you may or may not know that solo singer, Lee Hyun is also part of the agency!

He replied to the tweet which JungKook sent out to TXT, saying the interaction between the two groups look warm and nice. At the same time, he also talked about how 'pretty' both groups are.

Adding on, Lee Hyun also commented that he wished to have a Big Hit family concert, suggesting the idea to perform with BTS and TXT.

To that, he received a large amount of replies from fans, agreeing with his idea!

It looks like BTS's Jin had saw the reply and replied to the singer, "Hmm..", as if he was considering about the family concert proposal.

Fans were 'laughing' and loving the reply Jin had sent out.

Do you look forward to a Big Hit family concert in the future?