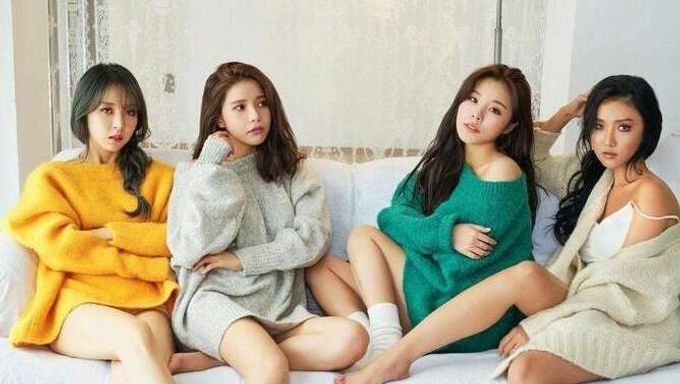 South Korea is currently a country  that is going through a very sensitive period as politics and controversial debates of all sorts continue to plague the nation's society.

One issue that South Korean society is currently divided over is about misogyny, feminism, and etc.

Which is why MAMAMOO's recent performance on Mnet's survival program 'Queendom' is currently one of the most heated topics online in the nation.

The girl group's choreography involved having two male backup dancers on a leash while they were crawling on the floor.

Netizens have stated that if it was a male idol group with women backup dancers on the leash, it would have already blown up on the front page of newspapers, but because it was women, everyone was calling it "empowering women". Netizens have argued that such wasn't an example of empowering women, but rather hatred towards men and also a double-standard. Some people have said while male idols and men would have been accused of misogyny, they found it unfair that female idols who have male backup dancers on leashes weren't being called out.

You can check out the performance below!

Please do me a favor and delete this article y’all ran out of interesting things to write about. P.S many famous idols have done this leash kind of choreography this ain’t new.

Pfff people would pay to be in these dancers' position.
And yes, gender-swapping misogynistic cliches to show what it's like the other way round is, indeed, a part of empowerment. In Mamamoo's performance, I'm sure it was just one of the cliches they used as a tribute to the various music genres they performed. But in performances where it's deliberately meant to look uncomfortable for men, well, that's the point, isn't it? "see how this feels?"

Me: the inclusion of bondage in their performance is, in fact, more valid than the usual misogynistic version performed by male artists, as it is satire that invites reflection on current normalised misogyny.
You: SO YOU THINK THEY SHOULD KILL PEOPLE??

So because they’re famous they should be allowed to get away with murder too right? Because who wouldn’t want to be murdered by Beyoncé? Right?

G-Dragon's done this before, Hyuna's done this before, and probably many more idols as well. This leash dance choreography is nothing new so why is everyone losing their shits over it?? Also it was only a small part of a choreo and didn't even imply anything. Haters gotta stop finding faults in things where there ARE no faults

GD in Bangbangbang was holding a bald female dancer in a leach ... Where were these people ?? It's a choreography damn it and that part lasted few seconds before they stood up and started dancing ! Get over it !!

Okay.. Who was holding the 'leashes'? Yes, moonbyul. And do we remember how she was dressed? Yes, very manly. She wore her hair up and hidden in a hat and was wearing a pant suit. Like yes, if a male idol would've had women on leashes it would be slightly problematic. And yes it would be problematic (in my opinion) if she stood over those men like some dominatrix.. But she didn't and i think that's an important detail. Also i think we should ask ourselves first, why the difference of a boy group vs a girl group doing something… Read more »

Well Mamamoo have doing it in their concerts. So why just argue now?

Koreans aint no different then Americans complain about the littlest things ?
This world ain't shit

these poor people have never hear of kinks or sex

Even though is not bad haveing man in leash is like you own them. A women owing their man is not illegal is call power to women.

So a men owing their women is call power to men

Didn't GDragon also put people on leashes in an MV? He didn't get backlash for that did he?

You a dumbass it’s was a woman

Are you stupid? Check your facts.

Except the dancer was a woman with short hair in the Bang Bang Bang mv.

It was because they're both men that no one cared. It didn't put shame to either gender. Now that people are doing women vs men & men vs women, it's getting much more heated.

The dancer on the leash was Parris Goebel, a woman. Idiot

It was in the Bang Bang Bang video and no one said a thing.