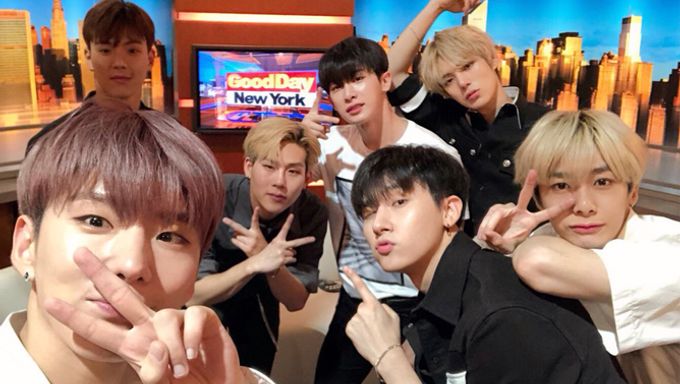 MONSTA X is proving themselves as global icons as on July 23rd (local time), they made an appearance on FOX5 morning talk show "Good Day New York" live broadcast.

According to Starship Entertainment, MONSTA X also went for interviews with several American media agencies such as Billboard, gaining the attention from the locals.

Currently, MONSTA X is having their "2018 MONSTA X World Tour THE CONNECT In U.S." with Chicago being the first stop and will be heading to seven different cities in the U.S..

Fans of MONSTA X showed their passion for the boys as it was noted that they have been waiting for them for a long time. Before, during and after the show in Chicago and Newark, many fans stood and waited for them.

On the morning of the live broadcast, many fans came early to the broadcasting station, hoping to catch a glimpse of the boys.

On the show, MONSTA X shared about their feelings for the U.S. tour which is currently taking place. They shared that this is their second time doing a tour in the U.S. and also some of the behind stories during the journey.

Continuing, MONSTA X's I.M and JooHeon surprised the MCs by performing an impromptu beat box and rap. They were also asked as to what their inspirations are when it comes to music. To the boys, they receive inspirations from life experience, friends, weather and so on. They also did not forget to emphasize and mention MONBEBE (fanclub).

MONSTA X also explained that currently they do not have plans for solo activities and want to focus on the group itself. It was also something which all the members want. This shows their passion for the group which many fans could not help but feel touched by their answer.

Previously earlier this year in March, MONSTA X came back with 'Jealousy' and they also performed the track in front of the viewers. Their highly synchronized choreography and powerful performance allowed many to recognize their charisma. Despite it being an early live broadcast, many were amazed by their ability to sing live.

At the end of the show, the 7 boys told their fans that they were making history in the U.S. and will be a group that the fans will need. They also promised to be together with the fans for a long time.

MONSTA X will continue with their U.S. tour in 5 more cities as planned.

Are you proud of how far MONSTA X had come?