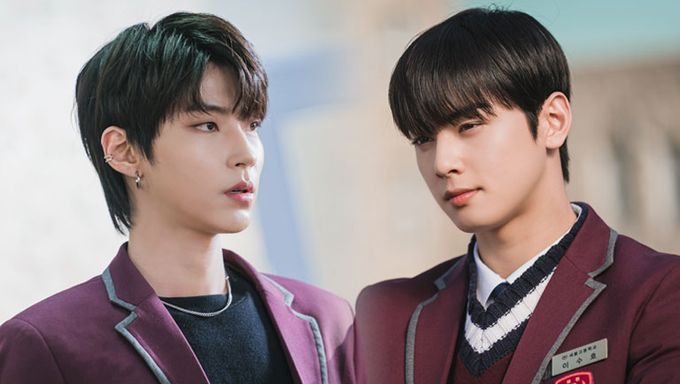 Welcome back to our love triangle series!

It is time to have a look at the new popular love triangle in the drama world. It is none other than the one in "True Beauty". The drama starring Moon GaYoung (acting as JuGyeong), ASTRO's Cha EunWoo (acting as SuHo), and Hwang InYeop (acting as SeoJun) has viewers divided on who they would like the female lead to date. Some viewers love the male lead while some have the second lead syndrome.

The two boys have a lot of charms and a lot to offer to JuGyeong. Here are each of their pros and cons.

Vote and join the debate in the comments on who -according to you- should JuGyeong choose.

Note: The article is solely based on the drama and not the webtoon. Be aware of the spoilers (up to ep 6 only).

SuHo is handsome, cold looking, and very good at studying. At first sight, he looks calm but he is really good at sports and especially taekwondo (he knows how to fight if needed).

SuHo loves JuGyeong and that for her true self: the one with no makeup and the one who has low self-esteem. One of his most heart-fluttering lines was: "You are pretty even without makeup".

The two of them have been sharing a lot. That includes her secrets and pains also as well as a part of his trauma that he has shared with her. They also have the same passion for horror manga.

But that is not all, SuHo is her angel protector. He has saved her so many times from diverse situations: protected her from bullies, helped her hide her bare face from others, made a shield from others bumping on her in the staircase, etc.

It did take him some time to realize his feelings for her but they are strong. SuHo feels so attracted to JuGyeong that he even hugged her by making some excuses such as checking the scent of his new laundry detergent.

However, while SuHo knows almost everything about JuGyeong, JuGyeong is still far from knowing more about SuHo. He is not telling her more and he has issues expressing his feelings.

The huge obstacle to JuGyeong & SuHo is the trauma he has about his friend SeYeon (acted by SF9's Chani)'s suicide and his familial situation. He has been opening about it slowly but he has been hidden his true thoughts.

SeoJun asked him about how JuGyeong would react if she knew that he had "killed a friend" and emphasized that "he has no right to be happy". Even if SuHo would like to open his heart to JuGyeong, he can't and has rejected her harshly.

Will SuHo overcome his trauma and obstacles to truly reveal his feelings to JuGyeong?

SuHo is not the only one interested in JuGyeong. The attractive SeoJun who is in the same class also likes her.

At the difference of SuHo, he has a bad boy/idol look with plenty of earrings and leather jackets. SeoJun rides bikes and gets into some fights with bad guys.

Viewers found him even more attractive when they learn that he is actually a soft guy with a golden heart. He had taken a leave from school and took part-time jobs to support his mom who was hospitalized while taking care of his younger sister at the same time. At the opposite of his first impression, he is a responsible and mature man.

SeoJun was first interested in JuGyeong because she was the one that interested SuHo (his enemy) but he has started to develop a true interest in her. He even fell in love with her in a cute scene.

JuGyeong and him had grown closer in the recent episodes. She got to help his sister and even learn a lot about his familial situation as their two mothers are close. The girl even got to witness him in a quite embarrassing situation (the famous "Okey Dokey Yo" scene).

However, SeoJun does not know the "real" JuGyeong! This might be the biggest con of this character.

Also, in the beginning, SeoJun was straightforward with her when his feelings were not real yet. He was saying that he will do whatever she wants and was even holding her hair so that it did not go into her food. Now, that his feelings are more real, he is shyer. Then or now, JuGyeong does not give him a lot of romantic interest compare to SuHo.

Finally, because of SeoJun, JuGyeong ended up running into danger and was kidnapped by the bad guys.

Are you Team SuHo or Team SeoJun?

Hello, thank you for all your comments and love for the poll.
We have received inquiries about the voting period. We are not planning to close the vote.
Everyone has easy access to the vote and can express their opinions at any time.
Viewers of "True Beauty" can share their opinion during all the airing time of the drama and after. We are not closing it because some might start watching the drama later and would also like to participate in the discussion Team SuHo or Team SeoJun.
Friendly reminder, the vote is just for fun and for all the viewers to express their opinions.

Team Suho all the way. 🙌 Because they are a more peaceful fandom than Toxic Team Seojun 🥰 who got nothing to do but to hate Suho. Lol 😏