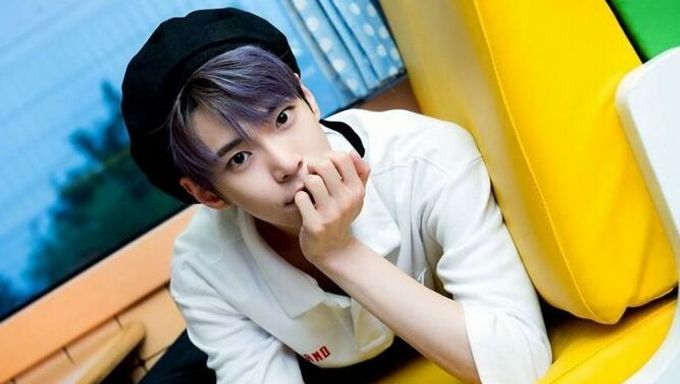 NCT member DoYoung, known best for taking selfies that are popular among many fans and girls for having boyfriend qualities, or qualities that ordinary people seek in their boyfriends, recently talked about his boyfriend pics through a live streaming session, which ended up having some very negative reactions from netizens.

The reason is because of his response to a fan's question asking him about the boyfriend pics.

He stated that he posted his popular boyfriend photos on social media mainly because he believes boyfriends like him actually do not exist in reality. He also suggested that people will not be able to find boyfriends like members of NCT in reality, while also saying ordinary poses that he often utilizes in the pics are done on purpose to make them look like peoples' dream boyfriends.

Naturally, some people found it quite pretentious and arrogant of him as they believed he was saying he and the rest of the NCT members were more special than ordinary people.

"I'm a NCTzen, but after watching this, I'm really turned off."

"Can't believe there people who are actually fans of this thing. Pitiful. Actually never mind. The people who are okay even with this guy spitting up comments like this are just like him."

"Who is this guy...I didn't know NCT had someone like him in their group."

Do you agree that what DoYoung said during the live streaming session was arrogant and thoughtless?

boyfriends like him DO NOT EXIST. he is playing the role of FANTASY. if you're too dumb to figure it out, that isn't Doyoungie's fault.. ?✌??

all NCTzens (including me) know that doyoung has a lowkey kind of humor, he says a lot of stuff like that and he's only messing with us, he's just so funny and caring, don't start the hate!! You just got him wrong, if you are a true NCTzen then you will NOT fall for that

they're really missing the point, he's saying that people won't be able to find guys like the boyfriend pictures because no one is that perfect in real life. He's saying that even him and the nct members aren't perfect and that he poses for those pictures to look like a dream boyfriend on purpose.

Miserable people try to make everyone else miserable too!! Leave him alone!!

Yall really tried it, i swear everything makes knets mad and upset. He could breath and yall will bash him for it

y'all twisted everything around lmao he didn't even say anything wrong

lmao this was a reach. I guess people are mad that their delusions were destroyed

Y’all tried it. Next.

Yall got his point wrong. He said that people like him or NCT don't exist in real life by which he meant that people aren't perfect, even NCT aren't perfect and people in real life aren't as perfect as they show or are advertised to be. That was his point y'all getting his words twisted and are misunderstanding him. Doyoung is one of the most open minded and understanding/caring idols I've known and I don't think he would say something ignorant or arrogant at all so yeah stop hating on him without any reason.

TRUE! and they forgot the fact that he's a genius, and sooooo open minded

I think you're absolutely right! But I don't think Doyoung is the most open-minded... He's the most scary person I've seen... He changes his emotions real quick.. One moment he will be cute and happy, the other super angry and salty... He's the one who gets angry the most easily and often in the group lol. But I think that's okay, because it proves that he is expressing honestly his feelings and thoughts.

What he said was right though. Like can you find yourself another Doyoung like him? Absolutely not. Everyone is different.

i think he right he didn't say anything wrong

ok but it is impossible to find someone like him or any of the members of NCT why?
cuz everyone is different you retards!! lololol

Well...idk he said it i didn't lmao

It's true though. He was pointing out that there is no one perfect in the world. Everyone's ideal of perfect will be different. Stop giving him hate for just expressing his beliefs

i'm not an NCTzen but the people who were triggered by this are actually clapped, he's not lying and i understand his point

Doyoung just wanted to exppress that people in real life aren't as perfect as they're advertised, and the way they seem are generally better than that of realistic people.

But did he lie? No

To add something he said ,,people like the Nct members does not exist in reality “ i think he wanted to say that the person they are on camera are not completely their personality, the perfection of them is an illusion fans want to believe but the truth is, this kind of perfection does not exist.. i hope i could explain his real opinion

Let’s be true, it will be really hard to find someone THAT perfect in reality, they are on strict diets and trainings, show themselves as polite as possible and a whole team works to let them look gorgeous.. i think he wanted to say that the ideal boyfriend does not exist, not that he is better than the others... maybe he used the wrong words to explain... a kdrama boyfriend is an illusion, his pictures show the same effect...

Hey 000, you're the retard. WTF are you doing? Hj is expressing what they assume Doyoung intended; it isn't opposing what you're mentioning. So tell me why you think it's significant to say this? The only notable thing here is your idiocracy.

Hey retard, they're criticizing him for his inability to phrase words in a more prudent way. But you obviously show how stupid you are by not even being able to understand that.