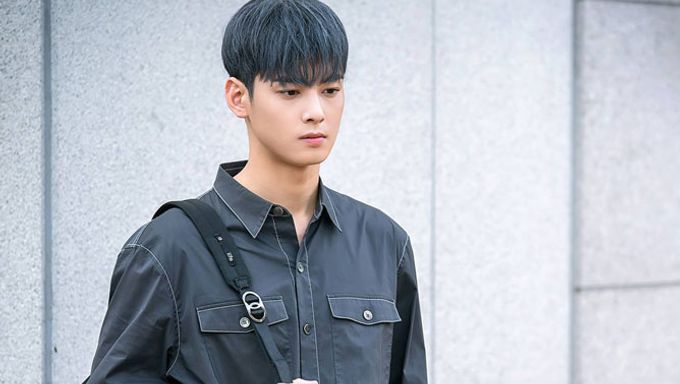 ASTRO‘s Cha EunWoo is the main lead actor of the drama “My ID Is Gangnam Beauty”. The drama is popular and interests netizens.

The drama based on a webtoon is telling the story of a girl living a new life through plastic surgery. Kang MiRae (Im SooHyang) is a first year at the university and she tries to forget her traumatic ‘ugly’ past. There, she met again Do KyungSuk (Cha EunWoo) a cold looking handsome guy. He is the only one aware of MiRae’s past. You can check information, pictures, and trailer of the drama and webtoon in our cast and summary here.

The drama is already at its fourteenth episode. In the first part of the drama, Cha EunWoo did not have many lines as he was mostly silent, however, in the second part, his character gets more talkative. Cha EunWoo's acting skills can be more easily judged by viewers as he has more lines.

On online communities, netizens' comments on his acting are very different.

On one side, there are netizens praising him for his good acting and perfect god-like visuals. They also defend him from people's criticism by saying that his role in the drama is a cold guy with no much words like in the webtoon and that therefore his acting is matching the situation. Fans say that his acting suits the character perfectly and are much happy about him being part of the cast.

On another side, talks about Cha EunWoo are not that sweet. Netizens comments are various from harsh to just soft criticism. On the soft part of the criticism, some netizens mentioned that despite an ok acting, he still has some awkward moments that need to be corrected.

Some say that he does not suit the webtoon character or that his overall acting is not the same as a good actor.

Looking at the harshest comments, netizens mentioned that his acting is the one of a robot. Some also say that he is "a flower with no scent" or that there were "no heart fluttering moment", etc. Most of the comment mentioned that having a handsome face was not enough and that he was lacking good acting skills.

One scene also was the center of criticism. During the festival, MiRae's teeshirt got stained and both characters go running to change her clothe. Viewers commented that Cha EunWoo was too awkward and looked like "Terminator" as he was running.

What is your opinion about Cha EunWoo's acting in this drama? Share with us in the comments and with the poll!

Read More : Ratings Of The Hot Drama “My ID Is Gangnam Beauty” (2nd Week Of September)

I don't really think that his acting was bad in "My I'd is Gangnam Beauty". But it's true he's an amateur in acting world. He's still learning. In his right now ongoing drama "True Beauty" we can see he's playing that same tsundere cold hearted type of role as Lee Suho. And I can say his acting skill definitely got better. He just have to keep going.

When I first saw Cha Eun Woo in Gangnam beauty I was pretty much convinced that those cold eyes and mean face was his real life resting face. But then I saw him in Revenge note and I literally went "Noooooooo, these two can't be the same person." Cha Eun Woo has the most expressive eyes I have ever seen, like ever, evvvverrrrr! I am pretty much amazed by how he could just flip into those cold eyes in Gangnam beauty. If that doesn't say much about his acting skills, I don't know what does!

Kyung Syuk is supposed to be an awkward, anti social, aloof, legendary handsome guy, what else do they want to see?

I can't think of any other actor to portray his role. He fits it well.

his acting is matching with his character in the drama. i believe he will do well in the future as now he is still young and just starting.

can see there is nothing wrong with his running style. All he did is play as the character role with his best and ady got the great result too. What a talent star! Pls keep it going !!

can't see there is nothing wrong with his running style. All he did is play as the character role with his best and ady got the great result too. What a talent star! Pls keep it going !!

Not like you critics can do better... he’s doing his best already ok STAN ASTRO

He's great but yeah he runs like a quiet cat. it would be awesome though if he was cast in some sort of futuristic movie that would be more suited to this level of stoicism.

I think cha eun woo is doing a great job. It's not easy to act. So why did netizens always say that he lack of actong skill. We should give him a support, of course.

He's good i think. I love his acting skills in this kdrama.

He's too wooden and his expression doesn't change. A cold guy should still show some emotion. So far he has been happy, amused, upset, frustrated but his face and actions are all the same.

If he is supposed to be playing a socially awkward and inexperienced with love guy...I think he is nailing it. Whether he has the capability of a wider range only time will tell. And yes...he is very handsome so the genius face is definitely being pulled off.

He is being directed by the DIRECTOR!!!

i think he's doing just fine for a first time lead. ugh normal of knetz but still disappointing that they are so harsh