When the news of Plan A’s Choi ByungChan dropping out from Mnet “Produce X 101” was first released, his fans were left in shock as they did not expect him to leave the competition since the final hurdle was just right in front of him.

Since his agency had mentioned that it was due to chronic Achilles tendinosis, many of his fans found it a waste that he would be leaving but felt that health is more important.

However recently, fans of Choi ByungChan found several factors suspicious which led them to wonder if Choi ByungChan’s drop out was voluntary or not.

The first point was that they calculated that on the end of the 10th episode, the rankings of the trainees were revealed but without their names. Only the amount of votes that they had received were revealed.

Hence, through calculation, they predicted that Choi ByungChan would have been roughly around the 6th place had he not dropped out from the program. This also means that he would have been part of the current top 20 trainees. 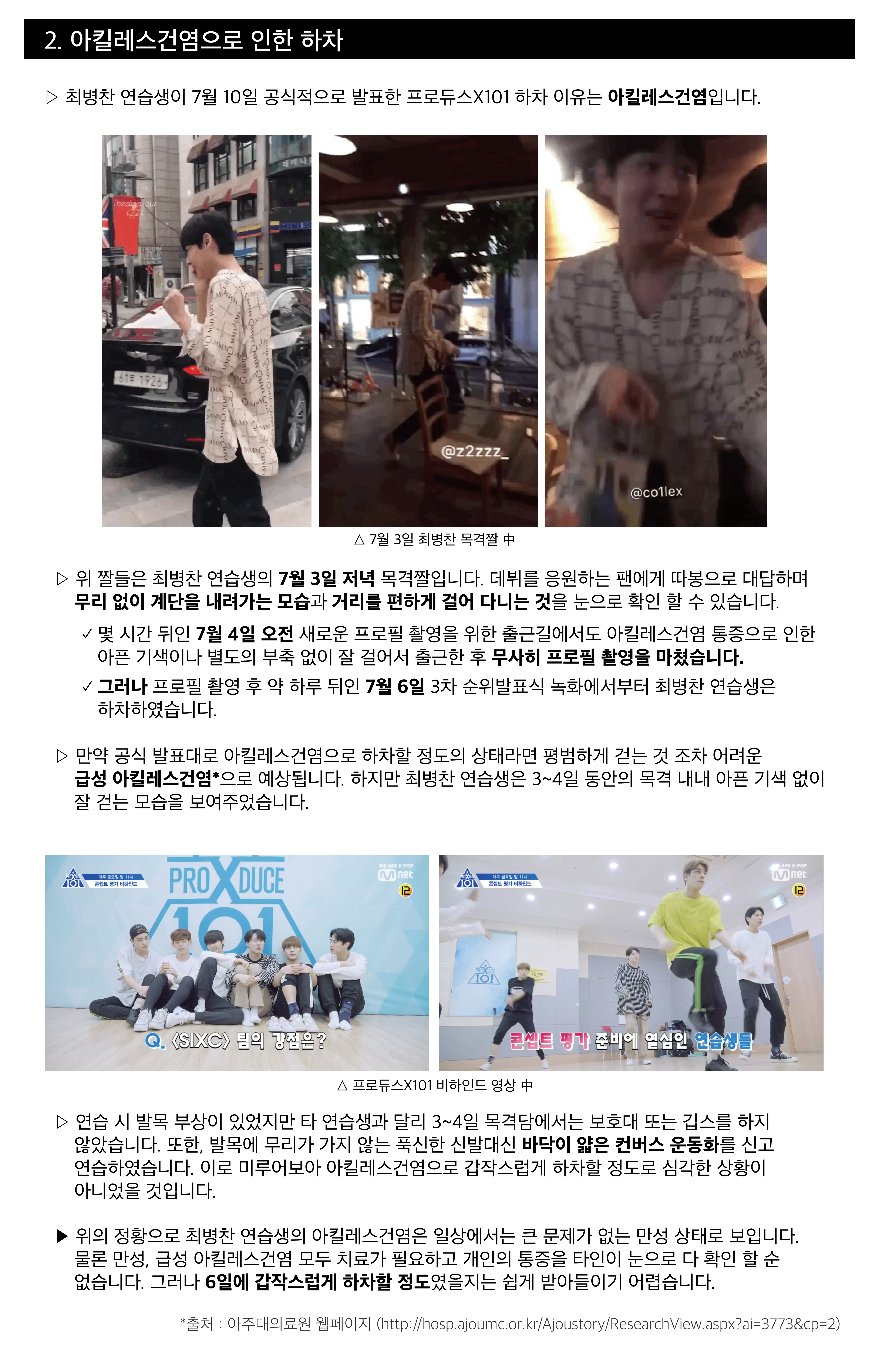 Moving on, fans mentioned that Choi ByungChan had left the show due to chronic Achilles tendinosis according to his agency’s statement on July 10. However, they felt that it did not really make sense fully because of the following points.

On July 3, Choi ByungChan was spotted by fans on the street and he was also giving thumbs up to fans, showing no difficulty in climbing up stairs or even walking. The next day, he had left for the new profile picture photoshoot by Mnet. During that time, fans also saw him walking with no difficulty and completed the photoshoot successfully.

Needless to say, during the behind the scenes video during the concept evaluation, Choi ByungChan was only seen wearing an ankle support but practicing with shoes that only have thin cushion. For someone suffering chronic Achilles tendinosis, the patient should be wearing shoes with thicker cushion that provide sufficient support. 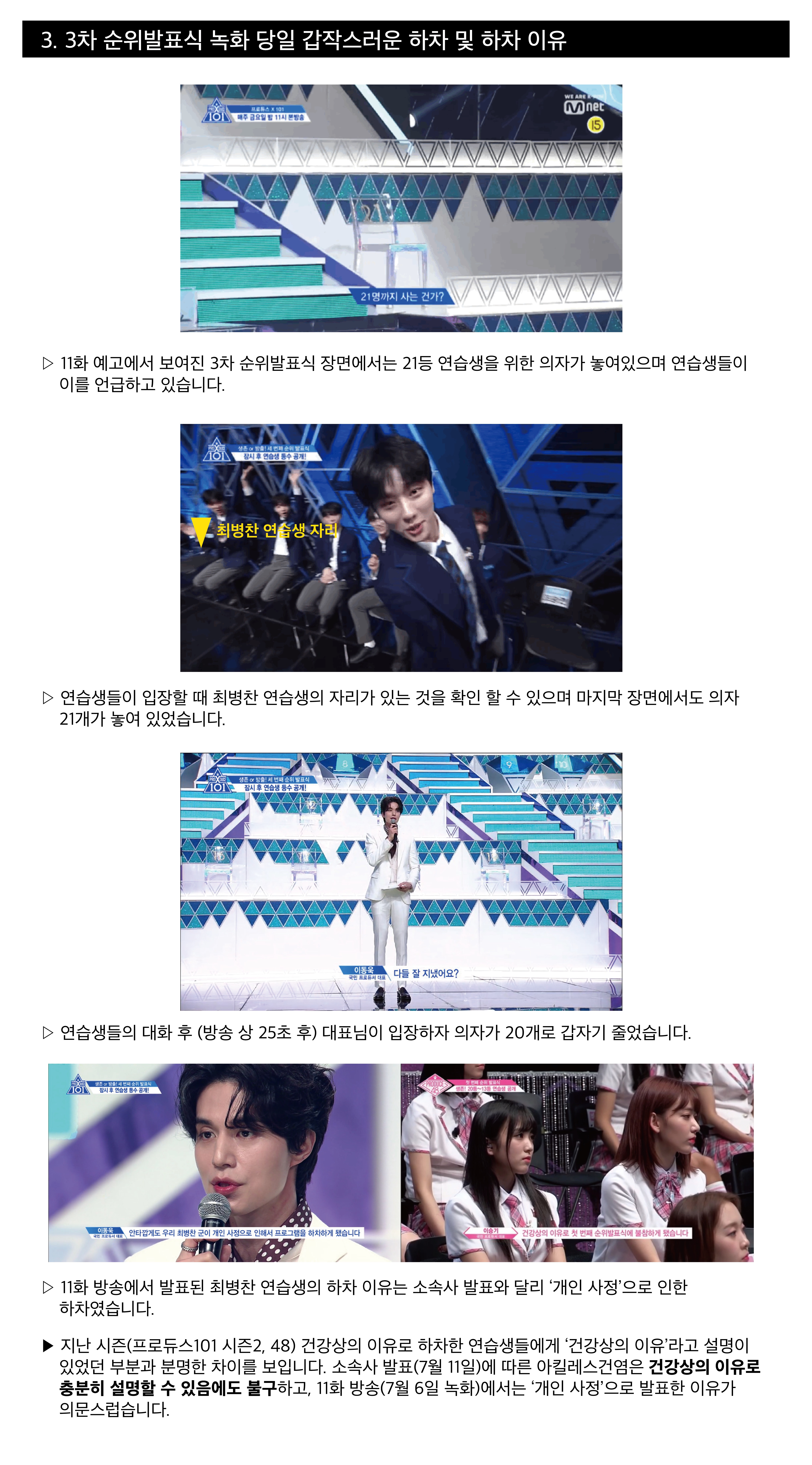 For the 3rd point, they pointed out that during the preview for episode 11th of “Produce X 101”, the 21st chair could be seen. However, during the airing of the episode, there were only 20 chairs in total. In addition, when the trainees were entering, they also spotted Choi ByungChan’s chair. 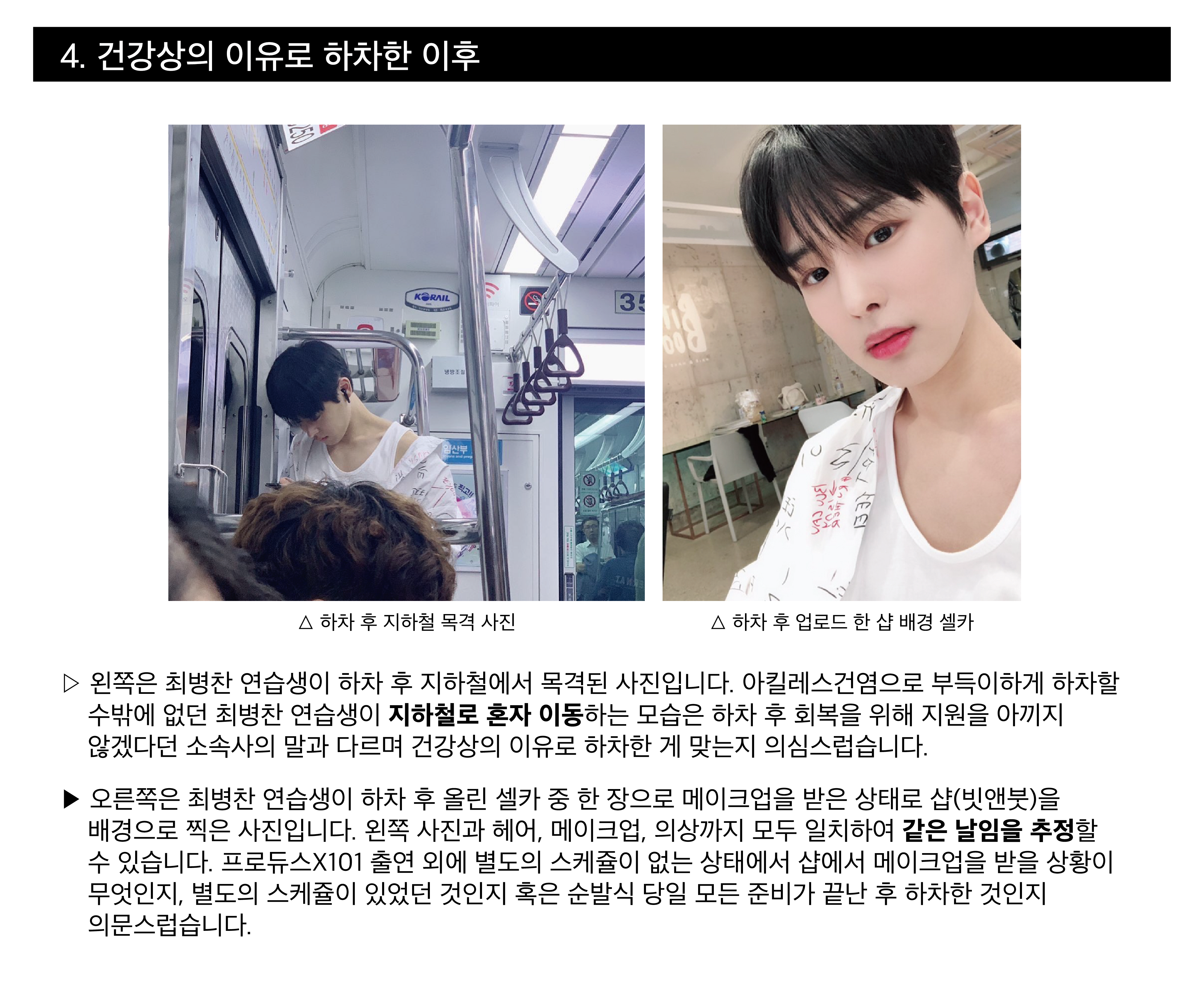 After the announcement that Choi ByungChan had dropped out from “Produce X 101”, he was spotted taking the subway alone. Needless to say, according to those who had spotted him, he looked perfectly fine.

Some questioned that if Choi ByungChan was suffering from chronic Achilles tendinosis, his agency would have provided him with better transportation instead of making him travel on the subway by himself.

On the picture on the right, it is a selfie of Choi ByungChan. Fans noticed that it looked like he was wearing makeup and even had his hair done. Needless to say, they were also able to spot the name of the beauty salon which he had visited at the background of the selfie.

Looking at how the clothes were the same for both pictures, fans believed that the selfie was taken on the same day when he was spotted taking the subway by himself.

This also led to them questioning if Choi ByungChan had a private schedule since he had his hair and makeup done.

With that being said, the fans are asking for 2 things from the agency.

Don’t hate on the boy. Whether he dropped out because of acute tendonitis or chronic or for personal reasons, I still think he deserves support. He is a sweet and funny person. He gained many fans through PDX101. We don’t know the details besides what they’ve told us, but I hope that he will continue to be successful.

I dont think its meant to hate on Byungchan, they’re just skeptical if Mnet is doing some dark magic again or what…