Netizens Horrified By YG's Love Story, Describes It As "Gross" And "Concerning" 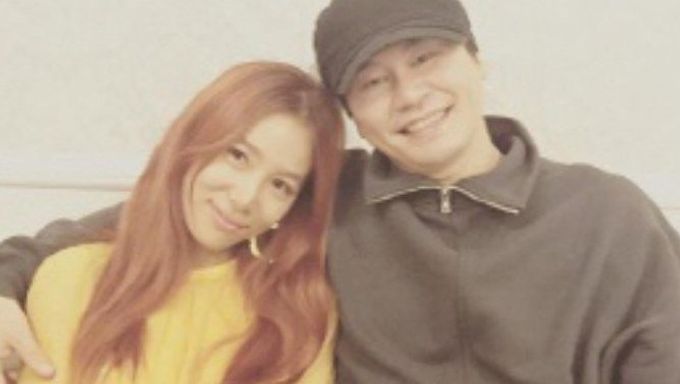 Ever wonder how YG Entertainment CEO Yang HyunSuk and his wife Lee EunJu met? For those of you who aren't familiar with the story, you're in luck as YG's love story has been circulating on various online communities in South Korea at the moment.

Yang HyunSuk appeared on TV show 'Healing Camp' back in 2012  and revealed how he met Lee EunJu.

He explained that the two were secretly in a relationship for around nine years, beginning in 2002, before going public and getting married in 2010. Oh, and it's also interesting to know that they have a twelve year age difference and that Lee EunJu is also the younger sister of former SECHSKIES member Lee JaeJin. Yang HyunSuk was in his early thirties and Lee EunJu was in her early twenties during the beginning of their relationship.

But here's the part where everyone is going bananas about.

Yang HyunSuk stated that he was interested in Lee EunJu long before they began officially dating. He caught a glimpse of her washing the dishes on TV when Lee JaeJin was giving a tour around his house. Lee EunJu was in her middle school years at the time.

"The camera showed her for a brief moment, for around I think three seconds? I saw this little girl washing the dishes and I went, huh?"

In addition, Lee EunJu was also recruited to YG Entertainment and debuted as a member of a girl Swi.T, which disbanded back in 2004. Yang HyunSuk also revealed that he actually was hoping that Swi.T didn't do well commercially as he was afraid that Lee EunJu would become too popular.

Below are some of the responses we've seen from netizens.

I just threw up in my mouth. That's concerning, he's a god damn pedophile

So many trolls acting like they know everything. Society is so superficial these days.

All the nastiness this man is capable of, no one should be surprised! It’s fine if a legal age person dates an older person, regardless of sex but this is a man describing seeing “this little girl” and he’s smitten!!! Eww!!! That’s as gross as some teacher having a crush on their 6th grade student!!! And the misogyny of purposefully failing her career so he could keep her down & she’d settle for a life with his sorry filthy ass...it’s despicable!!! All his corruption: hiring prostitutes, I’m sure having hookers himself, a hefty gambling problem, probably teaching his male signee’s… Read more »

This is so gross. I mean he was interested in her when she was in middle school. Pedophile smh this is makes me not want to ever start dating lol

Yg can honestly go f*ck himself. He is disgusting. Sketchy. Gross. Sexist. Like wtf im 100%sure these shoukd all lead to him being in jail

That is so disgusting.

this is messed up

Didn't we already know this? It's not really a secret that YG is a creep. The way he talked about female idols on mixnine kinda showed what kind of person he is