Netizens Love The Visuals In BLACKPINK 'KILL THIS LOVE' MV But Find The Song Lacking? 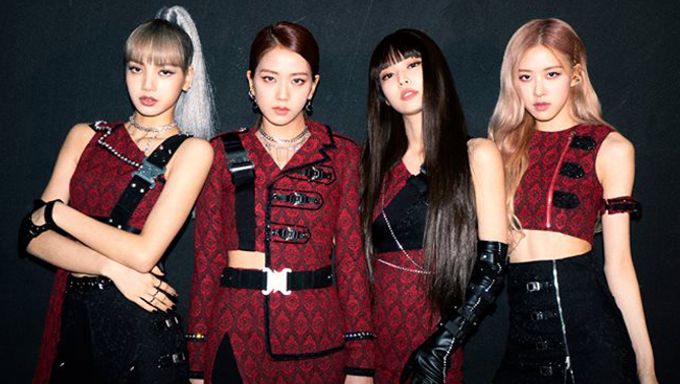 On Apr. 5, BLACKPINK released their highly anticipated new album and title track 'KILL THIS LOVE'. It has been 10 months since their last comeback with 'DDU-DU DDU-DU'.

If you have yet to check out their MV, you can do so below.

Through the MV, many were able to see the stunning visuals of the girls and also how much their agency had spent in making a high quality MV.

However, with that being said, their new title track seemed to have received mix reactions from the public.

Netizens shared their opinions on online communities about 'KILL THIS LOVE'. Some felt that the MV was very well made but there was something lacking in the song. 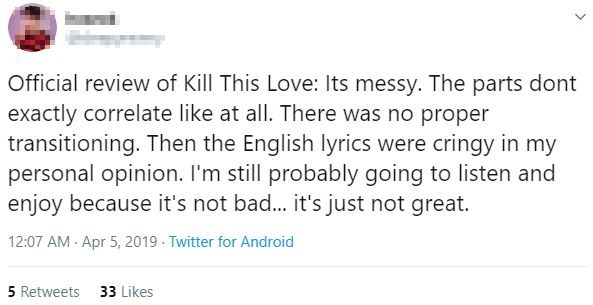 They also felt that the song was rather 'messy' compared to their previous hit tracks such as 'DDU-DU DDU-DU' and 'Playing With Fire'.

Some Korean netizens also feel that they could hear parts of 'DDU-DU DDU-DU' and 'Boombayah' which gave them the idea of how the song has parts that were 'copied and pasted'.

Needless to say, there was also many fans who love their comeback.

Fans from all over the world felt that 'KILL THIS LOVE' is actually one of BLACKPINK's best comeback and the beat of the song is very addictive. They also could not wait to see the girls perform 'KILL THIS LOVE' live.

If you are interested to find out more of about the music taste of the girls, you can check our this playlist on Spotify! The songs are said to be handpicked by the members themselves and will be available for the next seven days.

What are your opinions on BLACKPINK's 'KILL THIS LOVE'?

Read More : Will BLACKPINK Turn The Table For YG With ‘KILL THIS LOVE’ Comeback?

I am the biggest blink. I have supported them since the debuted and I still remember their debut teaser pictures. I have been waiting and setting alarms for every four am to wake up and like their teaser posts for kill this love. I was freaking out when kill this love cam out but when it ended my first reaction was, its done, so quickly? like I waited so long for their comeback. They are artists, not models, regardless of their video being cool, if the song didn't have the mv, people would hate it. Or all the hungry blinks… Read more »

Blackpink haters are here...because of the huge black cloud they cast over their biases! Just curious.....how many Blinks actually visit other groups' posts......every time, just to spill filth on them? I don't....ever! If they do well I am happy for them! I spend my time watching and following groups I like.....but I don't have to worry about them seeming more popular than Blackpink....because, right now! Blackpink is on top!!! And it is because they are very very good! And their MV's are the BEST!!! And all the hate proves it!

No matter what u think there's+4mil likes on the MV stats hit hard, So this antis opinions are needless 😀

no matter how flop this comeback is BLINKS will totally slay coz this is the only thing that they have and the ONLY thing YG can offer, hope YG will give these girls the thing that they deserve. i am not a fan but I kinda felt sorry for them. They are queens of Youtube not of KPOP, win daesang first, that is the job of BLINKs to have their girls other platform aside from YT.

Also this song is like a continuation of Jennie's solo from driving cars, to crying, to th ewater scene, exposure of phones and the group of dancer during the climax point of the song. it was so SOLO's continuation.

I am not a fan of BlackPink but I kinda like their songs coz tbh they really do sound like 2ne1 to me. First i got interested in their comeback coz teasers and fans are so overwhelmed about them since their comeback is the hope in their company iykwim, and BP is the queen of MV views and was expecting since powerful moves since "YG Entertainment had recruited 4 GLOBALLY FAMOUS CHOREOGRAPHERS to come up with the choreography for BLACKPINK’s comeback. Fans could definitely anticipate the upgraded versions of the girls. https://www.kpopmap.com/blackpink-is-set-to-return-with-kill-this-love-in-april/" so i thought their choreography would be more… Read more »

I thought this song was horrible and definitely their worst yet. The video had some nice visuals but that can’t make up for the song. I don’t think it sounds “western;” it’s just bad. It’s so disjointed and odd it doesn’t even sound like a song. It’s just as empty as Jennie’s “SOLO,” which never grew on me. The fact that this song is getting so much love just shows that Kpop fans are really in it for the visuals and not the talent. The choreography was as weak as it always is (I saw some blatantly recycled moves from… Read more »

It's just my opinion, the music is too thin and doesn't flow well. I like BP but not DDD, Solo or KTL. Not liking Teddys releases as of late and I'm not alone

Just go on and support your biases! Millions of people love the song and MV!! Funny, I never waste my time bashing groups that I don't follow....hmmmmm! I just don't follow them.....but other groups aren't casting a shadow over Blackpink......right now.....no one is!

Blame it on Teddy and everyone higher than him

This song is garbage, I don't like anything about it or Solo either but it'll be wildly popular anyway

This song will get stronger and very emotional after you are able to bring yourself into the mood. It took me 4th time of listening and I beginning to find that it is a seriously good song and surely going to be phenomenal. Many will find its better than DDDD after listening for some time.

This comeback was a bop for me, the message of the song was clear and the visuals were amazing as always. The highlights for me personally was everything the rap parts with the jenlisa duo and the vocal line which i must say have improved. Parts were almost evenly divided and they all had their time to shine too which was great to see. The song in general was fire! girl power!! so excited to see where they go next.

Also this is what her weave looks like on...the appropriate culture. Looks a little better don't you think?

What do you mean?? she looks amazing with that hairstyle! Go back to your trolling other fandom aight??

Well box braids and braids like those are an African style. Am I wrong? I have 2 friends from Africa...that's what they told me. And Egypt is in Africa...correct? It's also a part of western Asia. Near Jerusalem and such. Not near Korea...or china..or Thailand..or japan...riiiiight? The people in Egypt, and near there have beautiful, darker skin. I think it fits them. But when you're in the kpop industry..you're most likely are going to be whitewashed. But Lisa has naturally tan skin. And yk they won't show that. So if they'd let her keep her natural skin color...it would've looked… Read more »

Care about what?...Her braids? They just don't look right on Lisa. They shouldn't have given her weave. I liked her buns and high ponytail better.

Why do you care though?
Besides, braids are ubiquitous

I had a problem with it and I'm familiar with it. And before you come for me, check your grammar. That last sentence made no sense but I got where you were going. I'm not being negative. I'm just a critical Kpop fan. It's my opinion. And it's not negative. Did I say Lisa was ugly with this hairstyle? Nope. I said she looked different. I don't like it, but I didn't say it was ugly either. Half of the people on here don't think before they type. I suggest you do that. Not hating just saying. Have a nice… Read more »

Well i had no problem with it? lol get with that negativity

Ok I'm not a blink. For many reasons...but I still watch their MVs to see if they've improved. It was ok...but it wasn't as good as I wanted. The choreo looked very similar to their past MVs. I was expecting a blonde Jennie. And Lisa's weave...Imma just say it looked different ;-;...i think that's called cultural appropriation. They really messed it up for me when they gave Lisa light blue weave. But ig the song was ok.

guess i was expecting more...which is what happens after a BOP comeback like dududu

the song was boring af and nothing new, and they had cultural appropriation in the music video. disappointed but not surprised

Korean netz would feel confused on the song bcos its not really the familiar kpop beat and sound. Its more on a western arrangement which is logical bcos that's what they're targeting at the moment. They've had their time in Korea already and established themselves there well. Now its time to go over the world with this song. Its actually a good song and even the Ddu du Ddu du remix was good and has this very club vibe and I cant wait to hear it and dance to it!

Kill This Love sounds hastily put together, with the intention of copying Ddu Ddu for their international fans; its more US-pop than K-pop. It got to no.1 on US Billboard. But it only reached no.21 on Instiz (last night) and as of 12pm, 5 Apr (Seoul time) its already off the top 40 on Korea's Instiz chart. Dunno if YG delayed/ limited its release in Korea. BP was created for the international market and they are worldwide sensations. Ironically YG isn't able to enjoy their success at this time. YG stock is currently 0.4% lower for the day - despite… Read more »

It's still not number 1 on ichart.kr though, which combines all the korean charts and is where you see the Real Time Kill and Perfect All Kill if a group gets that. Kill This Love is only 4th on the charts combined currently, and in Korea it's now 23.21 meaning the first day is pretty much over. Which is quite shocking for such an established group when there aren't really any huge competitiors out there. BOL4 is big in Korea, but they aren't like BTS or something so BP shouldn't have the biggest issues going up against them for the… Read more »

not #1 on billboard but usa itunes

As it was released at 12am - all charts only reflect the song after 12pm. Its going up the charts now, though slower than expected for BP...

Love the song!! BP for the win