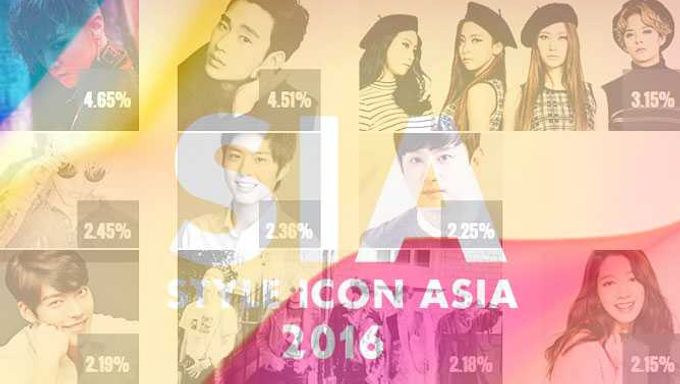 This year, fans were able to vote for their favorite K-icons, including the coveted Style Icon of Asia and K-cons, on the official 2016 SIA Awards page. Voting had been opened until March 3, 2016 24:00 (KST). The 2016 SIA will be on air today via Channel tvN, Mnet, OliveTV, XTM, tencent video, Tencent Fashion, Naver, and Tiving at 6:40 this evening, as scheduled. Popular K-Pop musicians including P-TYPE, KittB and HanHae have already been confirmed for the event, with more stars to be revealed in the days to come.

In the final vote results, top hallyu icons, G-Dragon and Kim SooHyun led the online vote in the major category of the award ceremony with 4.65 percent and 4.51 percent respectively. A trendy girl band, f(x) followed with 3.15 percent of the popular vote, maintaining a significant margin above Lee Honey, who is in forth place with 2.94 percent. The nominees for ICONS Award are YG Entertainment's CL, Lee SungKyung, Nam JooHyuk, WINNER, GD, SM Entertainment's f(x), Girls' Generation, FNC Entertainment's SeolHyun (AOA), CUBE Entertainment's Yook SungJae (BTOB) and many more. The nominees for the Style Icon of Asia Award are the goddess of China Tang Wei, the wannabe top model of Japan Yano Shiho, and 8 megastars in Asia.

Those whose unique presence inspires your style: ICONS Award

Those who represents the style of Asia: Style Icon of Asia Award