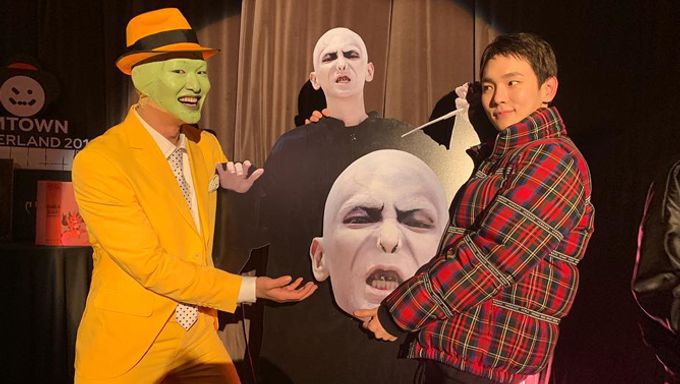 On October 31st, it is known by many K-Pop fans that SM Entertainment organizes their annual "SMTOWN Wonderland" where SM artists would dress up and attend the party.

For the past few years, SHINee's Key has been always very detailed in his costumes and this year was no exception too. Previously, he had dressed up as Ronald McDonald and last year, he was Marge Simpson!

With that being said, Key shocked many with his transformation for this year's Halloween as well! He posted on his Instagram and apparently he decided to transform into Voldemort from "Harry Potter" movies.

He looked extremely similar to the actual character and fans could not help but talked about how scary he looked at the same time.

Despite that being said, Key had removed the Voldemort look way earlier because of a conflicted schedule that took place on the same day. Instead, his effort was made known by replacing himself with a life size panel board in the actual party. He was seen posing with Onew on his Instagram!

In addition to his passion and dedication, Key released a video of the breakdown of how he got his makeup done for the Voldemort look.

It looked tedious to get his face transformed and fans were applauding for his effort!

He also managed to clinch the 'Best Dresser' this year!

Were you also surprised by his dedication for Halloween?

Read More : Can You Name These SM Idols Who Are Almost Unrecognizable In Their Halloween Costumes?

always slays every year at the party

Finally getting what he deserves <3 Congratulations on the win, Key <3