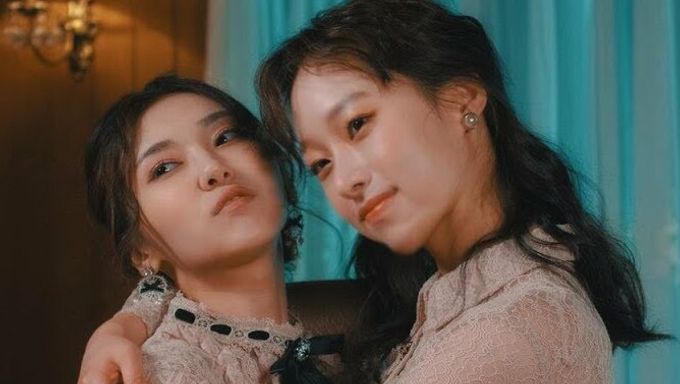 The topic of homosexuality is something that is gradually being discussed more often in South Korea, but still remains largely a taboo subject among the older generations.

K-Pop singer Tenny's MV for '159 cm' revolves around the story of two lesbian lovers who face discrimination and violence from their family due to their sexual orientation.

The MV has been by far the most "in your face" among all the K-Pop MV's that is about homosexuality, which is the reason why South Korean netizens who have watched it have been debating about homosexuality much more vocally than ever.

While we know that there are homosexual people in South Korea, who obviously support the MV, many of the comments have been expressing how homosexuality is not only unnatural, but also a factor that increases the chances of being infected with STD's.

"I don't think homosexuality is bad, but I do think it's wrong. It's unnatural behavior."

"If the anus is involved in sexual intercourse, not only are the chances of being infected with STD's higher, the anus is completely ruined. As you get older, your bowel movement gets worse, causing wastes to become watery, and if your anus is stretched, it loses the ability to prevent wastes from coming out, losing control over it. When unable to get to a restroom, the anus cannot control the wastes from coming out, and ends up slipping out. If you visit homosexual online cafes, there are lots of people talking about how they suffer from fecal incontinence.

"I think it's every person's freedom to accept or reject homosexuality. But shouldn't people refrain from criticizing? It's not even their lives, why should they criticize?"

You can check out the MV below.

I don't think that people know that there's more ways to have sex then just penetration... And yes a lot of gay men do penetration and it does cause bowel issues but that's there own business and it's not done as often as the media makes it seem. Homosexuality is completely natural completely normal it's not a choice it's just the way you are and it's not wrong or bad so please educate yourselves and stop putting such toxic standards on gay people. Thanks loves <3

Bowel issues or not, it doesn't change the fact the we still love who we love and there isn't a single thing that anyone can do to change that. The people who only focus on the sex part of being attracted to the other gender don't know what real love is. I could easily also say that being heterosexual isn't normal and go on about how you wrong you are for having sex, but I won't because of the obvious. In conclusion, everybody shut your mouth. You are not entitled to tell us that our feelings are abnormal when you… Read more »

Only proving my point that all you think about are the genitals, not to mention that the way you word your sentences makes me believe that you are just another child yourself.

Also, I beg to differ. I've met quite a few kids who are indifferent or supportive of same-sex couples. And what would you even have to say to a kid who has been lovingly raised by two Dads or two Mums? Fuck all is what.

are you a child? Why are children suddenly the basis for understanding? Children don't even understand how inflation works lol

Homosexuality is found throughout the animal kingdom, and non of em have an issue with it. It’s natural for other animals, so why would we be so different? Besides that, I don’t know why you would come here to read an article about a queer song just to put out such an opinion? And no, any kid that tells you it’s unnatural is because their parents convinced them so. Kids born into families with two moms or dads would disagree, as well as kids raised in an environment that doesn’t say homosexuality is weird or wrong. Why are you so… Read more »

Whats's the big deal Jesus..if you don't like it don't watch it

Homosexuality is found throughout the animal kingdom. Humans are the only species with homophobia. Who really is the abnormal one here?

I say you are abnormal. Agree?

And who are you to judge that? You don't know anything about us, hence why your opinion is invalid.