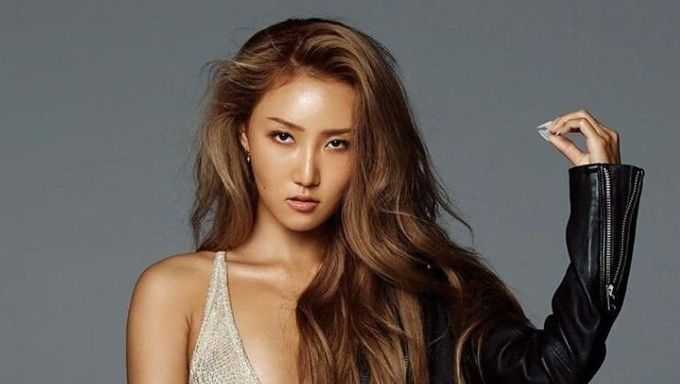 Toxic comments can be hurtful for anyone and the K-Pop scene is no stranger when it comes to dealing with this particular issue.

There have even been speculations that it has been the main driving reason for some celebrities to take their own life. MAMAMOO's Hwasa once had to deal with a lot of malicious and hurtful comments in the past as well.

In fact, she once talked about how she almost decided to leave the group because of hurtful comments.

During a past episode of 'Radio Star', Hwasa talked about how some netizens used to write negative comments about her unconventional beauty and visuals. Of course, nowadays, K-Pop visuals and beauty has slowly changed a lot as more people are beginning to realize that it's not just pale white skin that defines beauty and attractiveness.

The negativity towards Hwasa was so bad that some netizens actually even demanded for her to be removed from MAMAMOO as they thought she wasn't attractive enough to be in an idol girl group.

Some commented that her gestures were "weird" and her stage presence just lacked charisma.

Ironic right? Because Hwasa is actually considered to be one of the most charismatic idol performers at the moment.

Fortunately, Hwasa revealed that this actually enabled her to become stronger as a person. And after the storm passed, she went on to become an idol who ranked high in brand reputation indexes year after year.

Hwasa truly is the definition of a powerful and beautiful woman.

well thanks to all of you bcs rn , Hwasa are the top of EVEREST now yay

I thought it was wherein this news was referring to coz she has been to a lot of negative comments coming from malicious idol fans. I was so sad, I thought she'll add to the statistics of kpop members that took their lives. I don't know why some people can say so much harsh things to others? Why can't they just mind their own trash?

Stop this bad netizens! Can't you realize that doing these things can actually make someone mentally break down? Or even lose self esteem! You can never ever judge anyone bc nobody's been so perfect!

I agree with this.

can you guys say this comments in Instagram where she has a account to make her prouder and stronger she does not know about this good comments here go and say the comments in her account and stop the mean jealous people to say bad things to her!

Yah,the standard of beauty shall not be based on visuals alone.. It's how the person carries himself or herself.

That's the reason why so many Koreans suicide because of the looks or etc.?I'm impressed with hwasa because she proved that she is strong and powerful woman????love you hwasa

Koreans have this weird idea of beauty. Pale white (mostly makeup), skinny as hell. Like almost anemic. Hwasa was just a breath of fresh air. Couldn't look away. She is a show stopper.

its all about beauty if they are not beautiful they will get so much hate so do you wonna explain why they have to not put makeup! and its about popularity! I know more than you about kpop!

One, it doesn't matter who knows what level about KPOP , two. Now you're trying to get attention and start a comment war

U know, the moment I first saw a music video of mamamoo . I was really attracted to hwasa I really like her attitude when it comes to a live performance.i like her ❤️❤️❤️

I know right. The first time I saw mamamoo. I couldn't look away from hwasa. She steals the show everytime.

I really love the personality of hwasa she is so inspirational to us.Hwasa is the strongest woman I know And also the group MAMAMOO.Why other people judge others are they perfect I bet not HAHAHA fighting hwasa fighting MAMAMOO

I like hwasa especially when she perform in stage she is so very charismatic her stage presence is the best I like the way she do facial expressions it really describes the feeling of the song Hwasa was the First member who catches my attend no wonder even if many says she's not beautiful I'm still a standard of her the true beauty is in heart I LOVE YOU HWASA!!❤❤

Korea netizens need to update their beauty standard ideal. Its not always pale skin and a skinny body. All people comes with different shape and color. Just because someone is different from your taste that doesn't mean the person is not beautiful. The bar is low sir

100% agree! beauty doesn't only come from one direction

Actually, I thought the name MAMAMOO wasn't that catchy at first. But, this beautiful and charismatic woman, Ahn Hye Jin, caught me. Yeah, I know I'm a girl, but her cute personality and her beauty just made me admire her. She's so precious. Like, her face is the only face you can see in my gallery. I LOVE HER SOOOO MUUUCH❤. LOVE FROM THE PHILIPPINES☺❤ Wish she can read this (even if it's impossible).

She is beautiful with or without makeup
She is beautifully tanned
She is unique I am so happy she is defining her own beauty standards! Oh and her voice sets off eargasims what more can you ask for.

She is the most beautiful woman I’ve ever seen

I don’t think she ever wanted to leave the groups, she is someone that doesn’t care what people say about her, that’s why I love her soo much, she’s a strong woman

The article literally states that she said herself she was considering leaving the group. She obviously cared about the comments...

Guest
hwaSa is my queen

some people are just so overwhelmed by her talent that they do these things, well I can whole heartedly say... cant relate
stan talent, stan mamamoo, stan HwaSa.