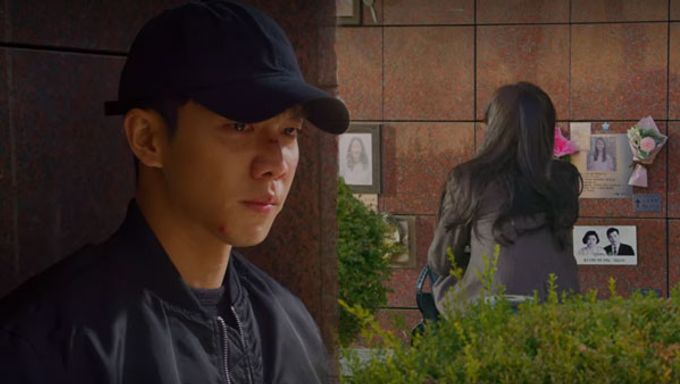 Kim SoHyun and Jang DongYoon are now reunited and a lovey-dovey couple.

This scene of the last episode especially caught our attention for its beautiful filming. Kim SoHyun and Jang DongYoon were apart and were dearly missing each other.

Kim SoHyun was waiting for him to come home and was looking at the sea in the hope to see the boat coming. When she saw it, she started to run down the hill as fast as she could. Arriving at the beach, she ran into Jang DongYoon's arms and they romantically kissed.

Lee SeungGi and Suzy as Cha DalGun and Go HaeRi

"Vagabond" ended and many of us are waiting for a Season 2. At the end of the season, Lee SeungGi had to pretend that he was dead in order to protect people he cared about and especially Suzy for who he has special feelings. He is ready for the extreme to save people he likes.

In the selected scene, Suzy was visiting the grave of Lee SeungGi crying and missing him. At the same time, he was hiding nearby and was the witness of her grief adding more pain to his current situation.

We are looking forward to seeing more romantic scenes in "Love With Flaws" and in dramas starting in December such as "Crash Landing on You". Stay tuned for more scenes in the upcoming weeks.

Read More : 5 Scenes That Make Us Fall In Love With SF9’s RoWoon As HaRu In “Extraordinary You” (Part. 2)