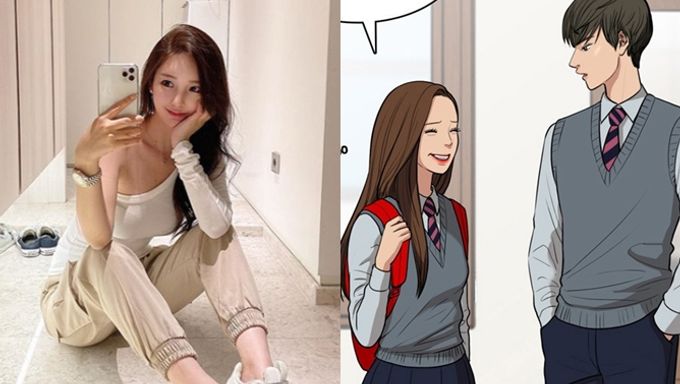 Yaongyi is the artist-author of the very popular “True Beauty” webtoon. Many in and out of Korea are in love with the story, a girl that turns into a goddess thanks to makeup skills.

The webtoon will be adapted in drama but the cast and the broadcasting schedule are yet to be released. You can also find out more about the webtoon and which cast Koreans want to see in the remake here.

Yaongyi is active on Instagram and likes to communicate with her fans. Recently, on her Instagram, she was talking to fans and answering live questions about the drama adaptation from fans.

She said: “The drama of “True Beauty” will be produced. However, me too, I also do not know the detailed production schedule yet. I just signed the contract and I am waiting. I don't know about the casting too.”

Fans asked her if she was going to take the lead role herself. To this, she answered: “I don't think I can do a role like a lead character because I am too old. The lead character I am thinking about is in her early 20s, so I really can't. It can't even imagine.”

Many of her readers think she looks like the main character of her webtoon. Readers have named BLACKPINK's JiSoo, Chae SooBin, AOA's SeolHyun, and more to be the lead actress. However, these are just wishes from readers and might not be one of the production team.

Are you also waiting for more news from the drama?

Moon gayoung is my pick

I would be happy for any person as the lead role😊

We reallllllyyyyyyy want our jisoo to have the lead role 😭😭 or atlease Jin, or both! Having a few idols would really make the drama a lot more interesting!!!

She should be the lead for her own comic

Well the author looks like the lead person but she has a choice not too.

The author vibe similar to the heroine, no wonder the fans asked if she'll play as the heroine! Read her comic and instantly fall in love with it??

What about park min young? she suit the role too

She's a bit too old (and I don't mean it in a rude way) for the role. Park Min Young is 34, while Jugyeong is in her late teens to early 20s.

I love her visuals and she's great at acting, but wearing a high school uniform when you're in your mid-30s shouldn't be the case for her. Besides, shouldn't we give rookie/younger actors a chance?

The lead role’s age doesn’t even matter, they just have to look the part and be able to act

Jisoo pls jisoo is perfect for the role❤

I think Chae soo bin or seolhyun would do great. But I prefer chae soo bin as she is preety similar to the webtoon character (for me).....

In my opinion, Chae Soobin would be perfect for the lead role because of her visuals and acting skills... i just thought jisoo maybe as pretty as jugyeong however, i overheard she could not act really well

I HONESTLY WOULD LIKE TO GIVE YOU A DAESANG FOR SAYING THAT CHAE SOO BIN WILL BE NICE FOR IT!! CUZ I WANT HER TOO ???

Jisoo is a gud actor... But yg doesn't allow her to show the talent

what do u mean