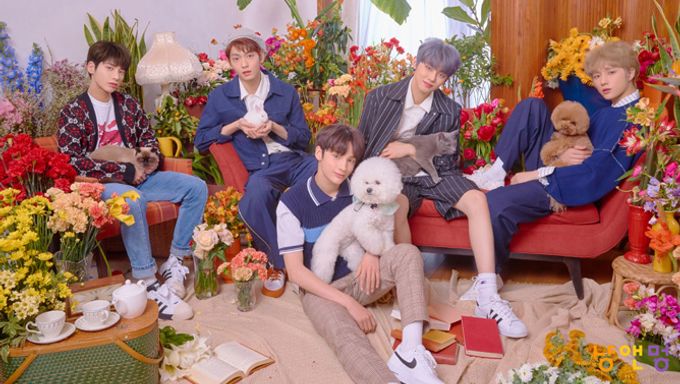 TXT or Together X Tomorrow has announced their official fandom name!

After 2 weeks of open submission for fandom name suggestions from their fans, they have finally decided on the name that would suit them the most.

On Apr. 25, the rookie K-Pop idol boy group announced that their fandom name would be called 'YOUNG ONE'. 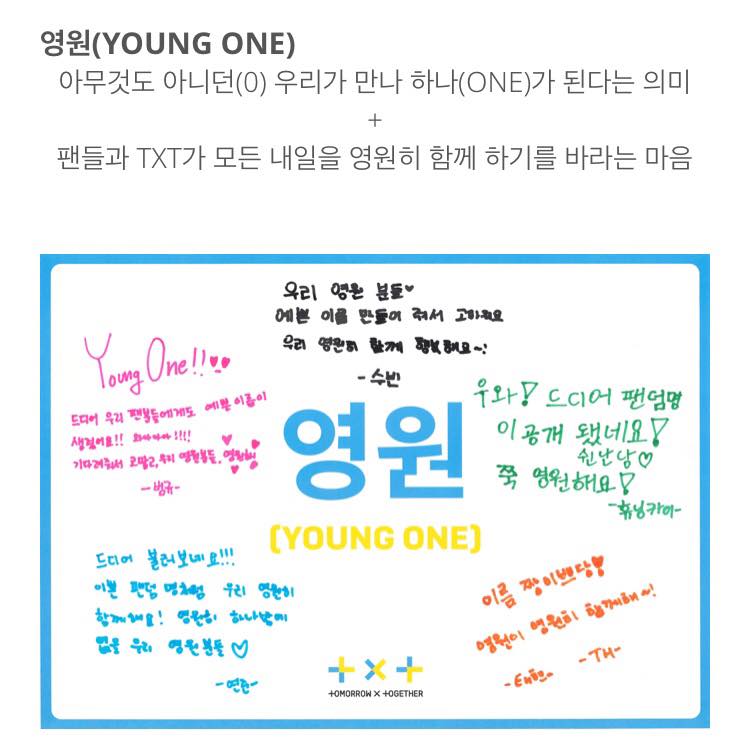 They explained that the reason they have chosen 'Young One' is because of how they were nothing at the start but because of fans, they became one.

In addition to that, the number zero is pronounced as 'young' in Korean and hence, 'young one' sounds similar to the term 'forever' also in Korean.

Fans were happy and glad to see that their fandom name has such deep meaning!

TXT will be heading to the U.S. for their showcase "Star in US" in May.

Are you are 'YOUNG ONE'?

I'm sure this has a clue in the fandom name so comment to let me know what is the clue and I think the clue that something about young fans of them.... I'm young I'm 15 years old heh!

UPDATE: We have published the updated version of TXT's official fandom name here.

wow so cute my idol

The fans are called Moa now

What does Moa stand for ?

I will be a young one foreveeeeeer!

Yes I'm a young one for life

I thought young one was tiffany young's fandom name

I heard it means "영원" (forever), it sounds like yonwon. So, not really what we think as "young one".

I thought it was navy

Lol what was I thinking

What about "LXF" (Love X Forever)
But I do like it

Why not "texts" or something HAHAHAHHA sounds stupid but yeah

I think fandom name " away "

I think that they should make their fandom name Star and not young one or navy because first of all navy makes no sense for a fandom name for txt and young one is taken by Tiffany but Star, it means stay together always remember which I think suits their name together x tomorrow so hopefully if they do change it, it will be Star.

hmm tiffany has the same name we have a problem

I'm not trying to start anything, I'm just annoyed by a certain quote. "We were nothing"!? So, I must've imagined all the people who said they were going to be big and the ones that hyped them up since they were simply ANNOUNCED due to the fact that they're under the same company as BTS, therefore ensuring their success since day one? I don't think they had the time to start as nothing to become something. They had the privilege of even winning their debut because the fandom was already so big! I'm sorry, what "nothing" are they talking about?… Read more »

Yes you do have point, but we may never truly know their feelings only they will and they may not know how to explain it

You may have a point, but I'm sure their friends and family didn't treat them as nobodies before they were even chosen to be in a group.
Everybody's a somebody if you have a talent, or great friends and family, no matter if you end up being famous or not. I'm not famous, but I only need my one and only best friend to feel validated.
I'm taking your opinion to heart, though, don't get me wrong.<3

I think by “we were nothing” they meant that before being TXT they were just nobody’s and no one knew them but now after being TXT they are finally somebody and they can only really thank their fans for that as it was because of them they are famous and feel like they are somebody.

Young One are Tiffany's Fandom

I love the name Young Ones!!

When you thought bighit as a whole company might be able to google something...

yeah...i wonder if they’re going to do anything about that....