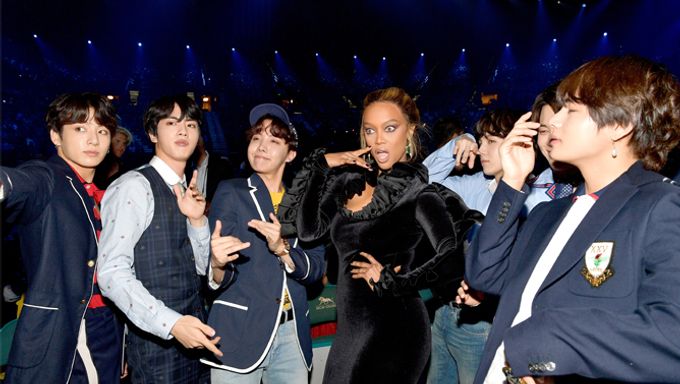 BTS had met tons of celebrities when they were present at this year's Billboard Music Awards (BBMAs) 2018. It seems like not only have they won the Top Social Artist Award but also won the hearts of many top stars there.

One of them includes top fashion model, Tyra Banks.

During BBMAs, she had uploaded a picture taken together with BTS and posted on her Instagram account. Since then, many media outlets have been noticing the interaction which they had.

Well, it seems like Tyra Banks is really a fan of BTS!

After Billboard had released the announcement that BTS's 'Fake Love' reached the Top 10 of Hot 100, Tyra Banks uploaded her 'homemade fierce music video' of 'Fake Love' on her Twitter account.

What @BTS_twt is accomplishing is amazing! First K-pop group in the #Hot100 Top 10! I spent the day jammin to #FakeLove as I got ready for the @agt premiere! The love I have for them & K-pop takin over the USA is real. Watch my homemade fierce music video scene & hair flip! #ARMY pic.twitter.com/ig2We5VChg

It had earned many positive responses from fans and it definitely hyped up the celebration of the achievement BTS had accomplished.

Share with us how you would do the celebration!