WATCH: Conan O'Brien Talks About His Interest in Korea 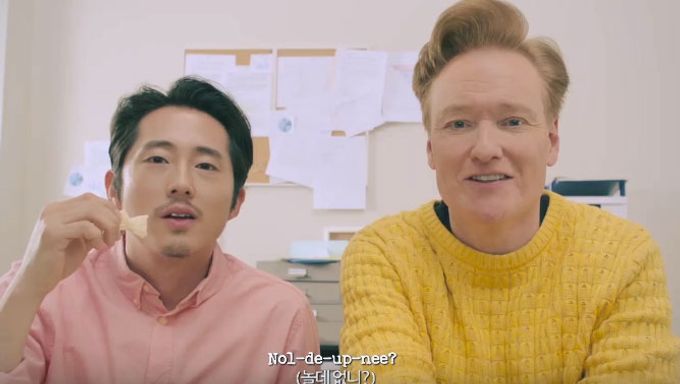 Live from the DMZ, Conan welcomes Steven Yeun. Plus, a special appearance by Supreme Leader Kim JongUn and a guard wearing sunglasses indoors.

Thanks to fan Sunny Lee & a box of snacks, Conan takes his show to Korea and get mobbed at the Seoul airport.

Conan’s suffering Korean instructor Jin Shil tries her best to teach him her language, but Conan is too pervy to learn properly.

Conan & his Korean teacher Jin Shil drop into Seoul's famous seafood bazaar and come away with a new friend, Samuel the octopus.

Conan makes a cameo on "One More Happy Ending" but absolutely butchers his lines to co-star Jang Na-ra.

Conan Checks Out A PC Bang

Conan plays "StarCraft" & "Counter-Strike" at a Seoul gaming café and samples some of Korea’s finest squid and silkworm snacks.

Thanks to Master Song & the other students at Kukkiwon, Conan is ready to take on his most fearsome nemesis: Jordan Schlansky.

After winning a Brownie stuffed animal for a young friend, Steven & Conan dine on a traditional Korea meal of...um, rice? Maybe potatoes or something?

Conan is looking to attain perfect enlightenment at the Bokwangsa Buddhist Temple but the noise from the windchimes & the monk's cell phone make it kinda hard.

Meanwhile, Conan recently guest starred on hit Korean drama series, One More Happy Ending.  With all 16 episodes of the K-drama premiering on DramaFever this Friday, April 15th fans can tune in to see Conan’s romantic side in episodes 9 and 10!

On Friday, all episodes will be available here: https://www.dramafever.com/drama/4861/One_More_Happy_Ending/