Kpopmap was invited to ‘2018 MONSTA X WORLD Tour THE CONNECT in SEOUL – Encore’ on August 25th.
Here is the review of the boys’ concert.

MONSTA X returned to Seoul for an encore concert for their 2nd World Tour ‘THE CONNECT’. ShowNu, WonHo, MinHyuk, KiHyun, HyungWon, JooHeon, and I.M have been to Asia, Europe, Latin America, and the U.S for this second world. In this world tour, there are 25 concerts in 20 cities, it is officially coming to an end after the Japanese concerts in October. They received a warm welcome from MONBEBE and proved themselves as global icons in this first and main part of the world tour.

They came back to Korea for their ‘2018 MONSTA X WORLD Tour THE CONNECT in SEOUL – Encore” concerts held at the Seoul Olympic Handball Stadium on August 25th (Saturday) and Sunday 26th (Sunday).

We cover the main 4 points of the event (Performance, Units, Fandom, and Trivial Talks).

MONSTA X is well known for their powerful performances, we went with high expectations and were not disappointed. The boys performed 24 songs for around 3 hours. The group performed many of their popular songs such as ‘Jealousy’, ‘Hero’, ‘From Zero’, ‘Destroyer’, ‘RUSH’, ‘DRAMARAMA’, etc. They did not decrease their energy and brightness. They kept jumping on stage until the last moment.

Concerning the stage effect, Starship Entertainment put much effort into these. They were great and various: fire at various times, light effects, smoke gun, confetti, etc. The stylists also did a great job, the outfits were nice and suited the members very well.

The stage for ‘FALLIN’ (also named ‘HEAVY RAIN’) was very energetic as the members were jumping and pouring water on the fans and members.

They had many powerful stages but also touching and emotional for ‘In Time’ and ‘Miss You’ with the members’ touching eyes and voices. The ending of the concert was also well though as the screen-curtain came down to hide little by little the members while they low down to keep an eye on the public. They looked cool until the end.

Fans need to see MONSTA X live on stage in order to receive the energy form them.

Members prepared unit’s songs for their world tour and for this encore concert, they modified some of these.

WonHo, KiHyun, and MinHyuk performed ‘Neol Hada’ and ‘No Reason’ with uniforms. According to the members, ‘No Reason’ was prepared in 3-4 days but it was perfect. The concept was cute and fresh. 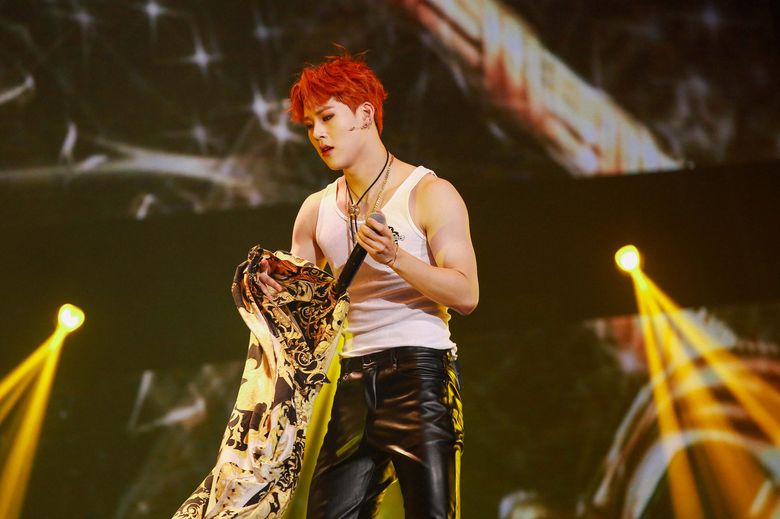 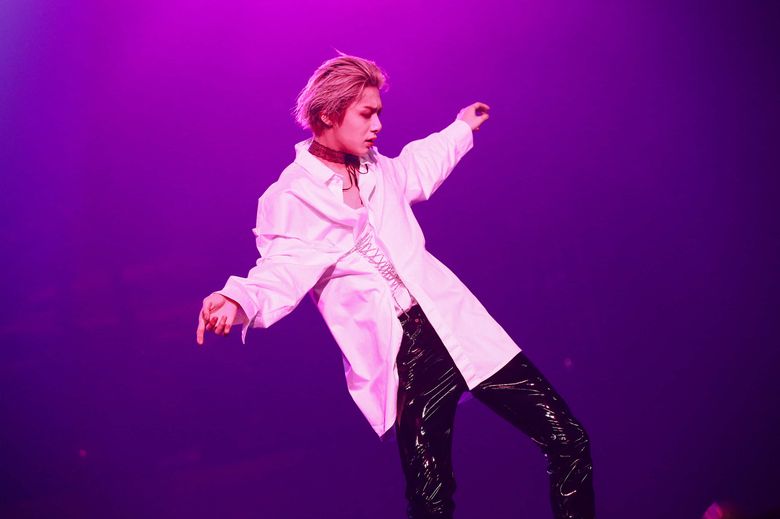 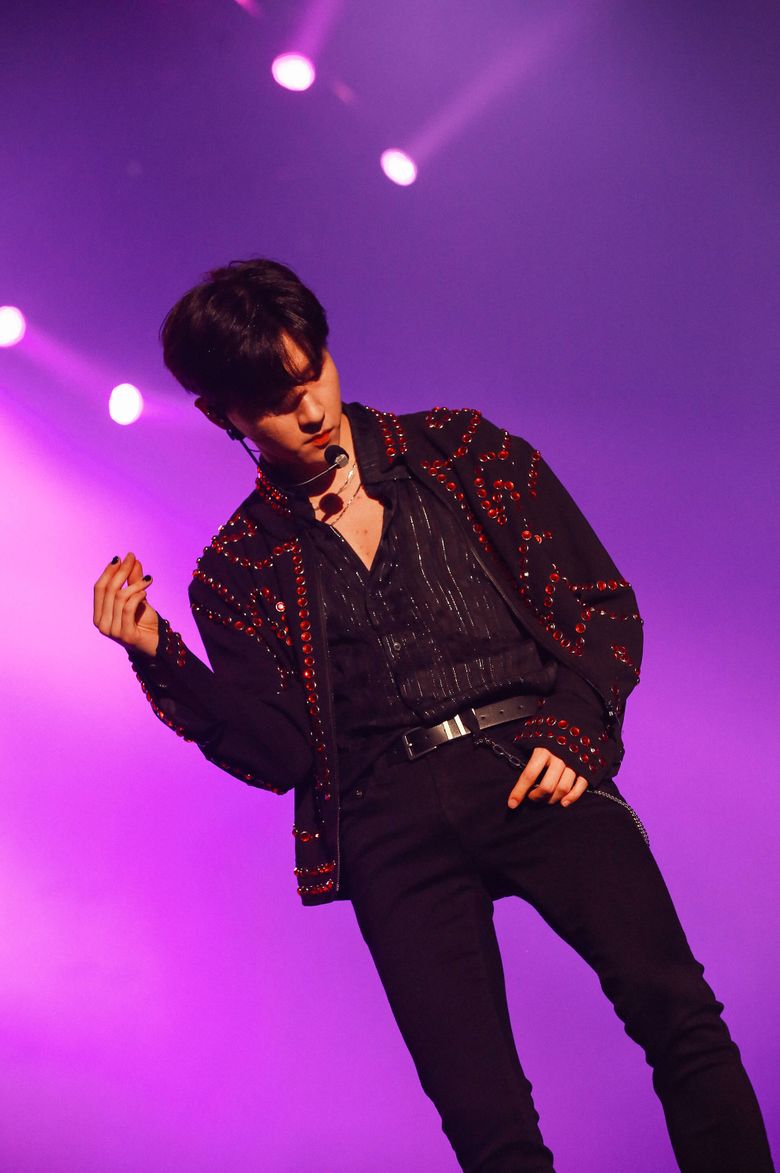 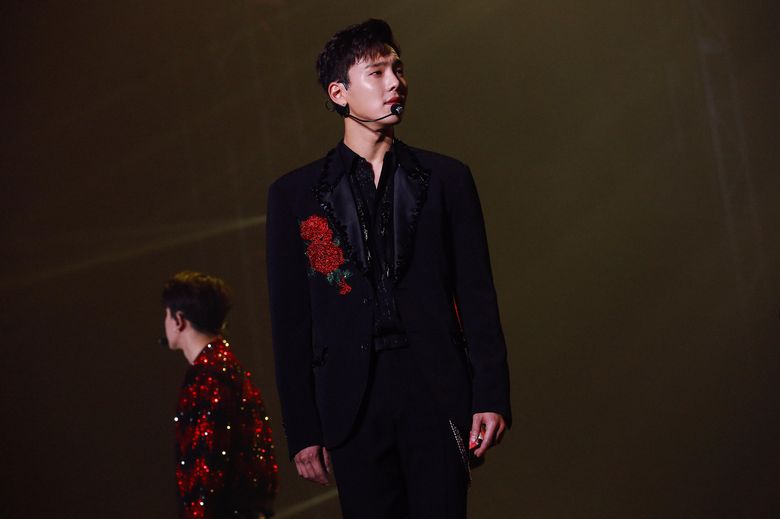 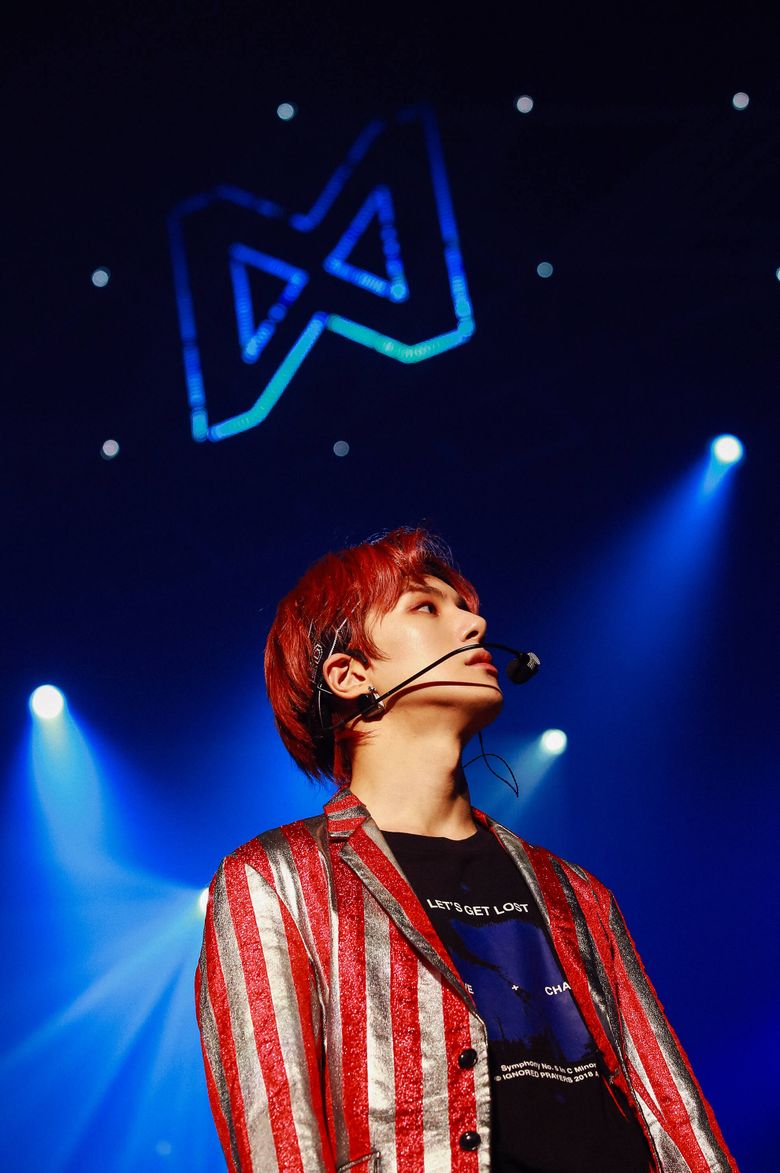 I.M and HyungWon did a cover of Drake’s ‘Fake Love’ and Charlie Puth’s ‘How Long’. For the first song both of them showed perfect swag and for the second did a sexy dance performance with close physical contact.

ShowNu and JooHeon did a cover of Bruno Mars’s ‘Versace on the Floor’ and the song ‘Kang BaekHo’. The first part was touching with great vocal skills. In the second part, both showed their powerful masculine dance.

These songs were great.

Before the opening of the concert, MONBEBE from all over the world gathered in front of the stadium: exchanging and buying goods, taking pictures, etc. Outside, the fans were already hype. During the concert, the fans were perfectly synchronized with the members. The lightstick (mondoongie) and screams warmed the boys up. MONBEBE all came prepared to see the boys and warmly answer their jokes, awkward moments, questions, tears, etc.

A funny episode happened at the end of the concert, a fan gave JooHeon a cushion with a printed picture of him wearing a stocking on his head. The famous scene among fans in ‘MONSTA X-RAY’ season 3. The boys were very pleased and laugh at the present and hold it tight for a moment.

MONSTA X members are well known in the fandom for being caring and sweet to fans and also for being hilarious. They did not disappoint our expectations, the boys were ultra fun! During their 8 ment sections, they made funny jokes, sweet words and touching comments. They kept fans hyped and excited while asking them to scream and asking “Are you already tired?”. Also, during the concert, they also had great interactions between members which is also nice to see. They were joking around together.

For example, JooHeon talked about his new hairstyle (brown-orange color) and the members start to have fun with the fans’ lightstick by making it changed of colors according to their hair colors.

Another episode during a ment section is KiHyun and HyungWon showing their abs to fans. They received a hot answer from fans. However, one part of the audience could not see KiHyun’s abs because they were on the opposite side. Hearing that, he eagerly quickly answered to these fans’ request by showing it a second time. During ‘Hero’ performance also, WonHo and HyungWon showed their abs while dancing.

During the concert, they also showed various videos. They were touching and funny. For example, WonHo would recommend ‘Fighter’ as morning call to fans.

At the end of the show, they had a touching and teary moment while saying goodbye.

It is always important for a fan to see that their favorite group is caring and loving them as much as they love them. MONBEBE are already well aware of the members’ love. During the concert, their love could be felt. Members were sweet to MONBEBE with great fanservice and sweet and friendly words to them. The boys also were having a great interaction and ‘conversation’ with the fans, as they even time to time answered the fans’ words. Members also captured this moment with fans by taking pictures with them.

During the concert, the members kept worrying about MONBEBE. For example, they were concerned at fans because of the typhoon and thanks them for coming despite it. HyungWon also well aware of fans’ worries about his health, he mentioned several times to not worry for him as he was not as weak as he appeared.

Also, they did not forget the fans in the seating area and 2nd floor, the members came to meet them. Waving and smiling with sincere heart, they greeted their fans. WonHo even jumped high and climbed to be able to greet fans on the 2nd floor closely. I.M danced in front of fan’s camera, etc.

During the concert, at several times all the members expressed their love to fans and how much they care about the fans. KiHyun said, “MONBEBE is everything. Little by little, we are matching everything to MONBEBE. When we dye our hair we think first about what MONBEBE will like. We prepared everything for the concert – song, song list’s order, videos – while thinking of MONBEBE”. Members also underlined at several times that “We are here because there is MONBEBE”.

To conclude, at the start of the concert, KiHyun said, “To those of you who are attending MONSTA X concert for the first time, you will fall for us.” This playful comment might somehow sound a bit too confident but is completely true!

We hope more MONBEBE will get to see the boys in a bigger stadium next year.