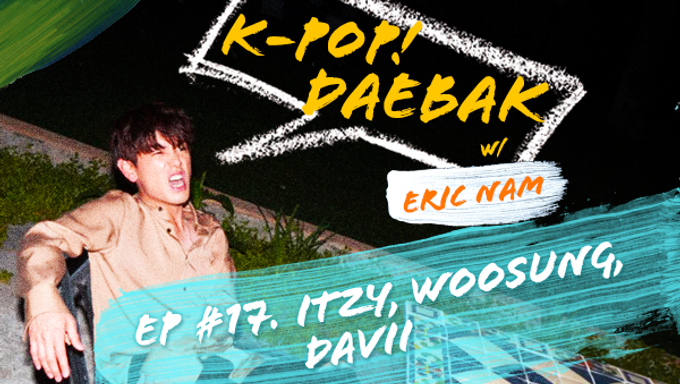 This episode of K-Pop Daebak w/ Eric Nam, we have a mystery person with a British accent who opens for the show who naturally changes his accent into American. (It was just Eric).

Welcome back, everyone! On the 17th episode of this podcast, Eric opened his show by giving us an update of his new upcoming album. According to Eric, he has been working on so many songs which he feels super good about and is struggling to decide which songs to put in the upcoming album and me for one am super EXCITED!!

Anyways, let’s start with the first artist which is ITZY , coming back in 5 months with their second EP title, “ICY”

According to Eric’s explanation of the song, “ICY” was produced by Caesar and Loui who’s recent work was Red Velvet ’s “ZIMZALABIM”! They have appeared on the podcast previously so if have missed the episode, we have the recap riiight here!

There was also another writer involved in the production of the song, JYP himself, and Eric speculates that there might’ve been multiple renditions of this song and the final version was made by choosing from multiple options.

Eric commented that the song sort of reminded him of “Dalla Dalla” but not really, saying that it has the same energy and vibe but there’s a definite difference to it. He also added how he really liked their ferocious dance breakdown during the song.

When talking about ITZY and their music video filming location(LA), Eric talks about his favorites locations to shoot a music video at and you can find that out in the actual podcast!

Moving on, the next artist is “The Rose ” main vocalist and guitarist WooSung  and his solo debut single, “FACE”. Eric had already mentioned in the past that he really likes WooSung’s vocal style and said he’s simply liked the song after hearing it.

Eric shared an episode that he saw WooSung a while ago and guess what? WooSung had agreed to come on the podcast!! There are more and more artists coming into the podcast as guests! Super exciting!

The last featured artist for this episode is Eric’s personal recommendation of the week, and it’s DAVII with “Nothing Without You(사랑했었다고)”

The singer DAVII is a singer-songwriter and Eric shares that although he had never seen him in person, he is aware of his works since DAVII had been producing a lot of Heize’s songs.

During this, Eric also questions about why the Korean title and the English title are different for the same song and how he had been seeing this trend, quite a lot lately.

As you can see, the Korean title for the song “Nothing Without You” is “사랑했었다고” and the direct translation for this is “I used to love you”, which is totally different from the English title. (Marketing perhaps?).

In addition, Eric promotes his friend Peniel ’s new song, “FLY 23”. After explaining the meaning of the song, Eric teases the listeners that they have recorded a “Catching Up” series with Peniel and that it’s such an interesting episode which will be released in a couple of weeks!

With that, Eric moves on to rambling! During the rambling segment, Eric talks about dogs as his long companion had just passed away recently. He mentions although it’s very sad, the dog had a long rich life. If you want to hear more, go check episode 17 of K-Pop Daebak w/ Eric Nam on your podcast providers or WATCH them below!